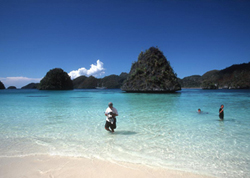 Raja Ampat is the name of islands located in West Papua, Indonesia. The name of this region has been very famous worldwide for its beauty on land or under water. Raja Ampat is the paradise of coral reef, so this place is a “sacred” place for the divers all around the world. According to the local legend, the name “Raja Ampat” was originated from a story about a woman which founded seven eggs. Four of these eggs hatched into four different princes. They parted to different places Waigeo, Salawati, East Misool and West Misool and then became king there. Meanwhile, the other three eggs, hatched into a ghost, a woman, and a stone.

In the Regency of Raja Ampat, there are 88 villages and 10 districts, which are the expansion area of Sorong Regency. The total area of Raja Ampat reaches approximately 46.000 km2. 15% of that area is land, and the rest is sea. From 610 islands, the occupied islands are only 35 and not all of the islands have name. There are 4 main islands here, Misool, Salawati, Batanta, and Waigeo. Raja Ampat Islands is in the area of Coral Triangle. Coral Triangle is an area which is rich with the variety of sea biota in the world. Some of the countries which are located in the Coral Triangle are Indonesia, the Philippines, Malaysia, Papua New Guinea, Japan, and Australia.

It is estimated that there are more than 1.070 species of fish in the Islands of Raja Ampat. The fish are the kinds with high demands such as tuna, mackerel, grouper, napoleon wrasse, red snapper, sea cucumbers, shrimp, and lobster. Thus the main profession in this area is fisherman. Besides that, the local residents also do pearl and seaweed cultivation which are exported to Australia, New Zealand, China, and Japan. Some of the islands even have more potential like gold, coal, oil, gas, nickel, and the other minerals. 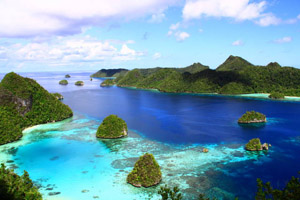 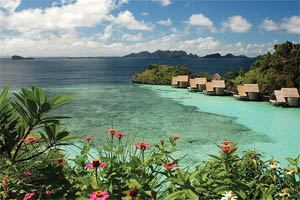 The Most Complete Underwater Flora and Fauna in the World

Raja Ampat has been acknowledged by the world as one of the best 10 waters for diving. According to the visitors who had dived in this area, the waters of Raja Ampat is said as the one who owned the most complete flora and fauna in the world. The species of corals are estimated reaching 537 species.

A research in 2001 until 2002 reported that there are more than 540 kinds of hard corals (75% of the total number in the world), more than 1,000 kinds of corals, coral fish, 700 kinds of mollusks, and gonodactyloid stomatopod crustaceans. It means that 75% of coral species in the world is located in Raja Ampat.

The water condition of Raja Ampat Islands is influenced by the water mass from West Pacific Ocean. It could be seen from the current of the ocean which moves from east to northeast and in line with the island of Papua. This current is called Halmahera Edy by the researchers. The existence of this current makes the underwater of its area fertile. The temperature of the water also contributes to the fertility, with range from 27o – 28o C. The light could penetrate until the depth of 30 – 37 meters under the water. That fact explains why there are a bunch of coral reefs in Raja Ampat.

The ecosystem of the coral reef could manage their own food actively for the other organism inside it. Hence, the waters of Raja Ampat are the best place for the fish to fulfill their need for food such as plankton for the small fish, or other fish for the bigger one.

For visiting Raja Ampat, you can depart from any place in Indonesia which has airport facility. For example, if you are from Jakarta you could go to Sorong first through Manado. The length of the flight is up to 6 hours. When you arrive in Sorong, Papua, you could go to Waisai which is the city of Raja Ampat Regency.