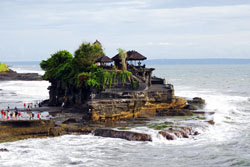 Tanah Lot is a beautiful temple located on a beach in the area of Beraban Village, District of Kediri, Tabanan. From the capital city of Tabanan, this temple is located 11 km south. Meanwhile from Denpasar, this temple is approximately 30 km to the west and could be reached in 1.5 hour driving or 43 km from Kuta and need around 2 hour driving.

Tanah Lot Temple was built on a rock hill in a beach and could be visited on foot in a couple of minute from the parking area. From the coast, this temple is only 100 meters and could be easily visited if the beach is in low tide. This tourism object is very famous for its amazing sunset. The word “Tanah Lot” consists of two words, “Tanah” which means coral rock/land and “Lot” or “Lod” which means sea. Thus, the word Tanah Lot could be interpreted as a rock in the middle of the sea.

Tanah Lot Temple is a member of Dang Kahyangan Temples and has a function as a place for worshipping sea guardian god. Tanah Lot Temple was built in the 15th century by Hindu Pedanda (priest) called Danghyang Nirartha which came from Majapahit Kingdom. Danghyang Niratha was on his way spreading Hinduism from Java to Bali. Before building a temple in this location, he felt a strong holy vibration radiated from the area of this beach. According to the legend, Danghyang Nirartha was successful in strengthening the belief of the local residents for Hinduism. However, a local priest and the leader of this village, Bendesa Beraban was unhappy because most of his followers shifted side following Danghyang Nirarta. This local priest was so angry and then tried to expel Danghyang Nirartha from his village. He agreed, but before leaving the village with all his magical power he moved a big rock into the beach and built a temple on top of it. He also transformed his scarf into some guardian snakes. These snakes even still exist until now and these snakes are the species of sea snake characterized by their flat fish-like tail and black with yellow stripes body. Bendesa Beraban was so amazed and finally became the followers of Danghyang Nirartha too.

In some particular months, if you visit the area between Tanah Lot Temple and the cliff, you will be able to see a wonderful glowing sun set in the middle of the cliff’s hole. Unfortunately, this phenomenon is rare and could only be seen in the months when the sun’s position is a bit north. 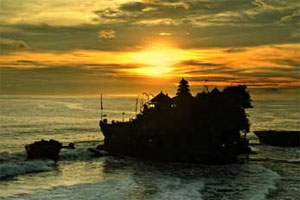 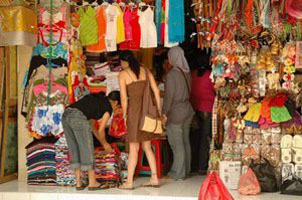 In some of the holes under the temple of Tanah Lot, there are some sea snakes which by the local residents are believed as the guardians of this temple. These snakes are very friendly, but cannot be disturbed. People say that the venom from this snake is 3 times more dangerous than the venom of cobra. There is also a freshwater spring here and could only be seen when the wave is low.

The area of Tanah Lot is a holy area, so if you visit this beach, you must obey the rules here such as dress politely, do not swear or use vulgar language, and do not do misdeed activities. If religious ceremony is being held, you must not make noise or you can find an enough distance for taking photograph so you do not disturb its process.

As a mainstay tourism object, Tanah Lot has been maintained professionally and equipped well with various facilities. In the entrance of the temple, there are a lot of art shops offering various kinds of local handicrafts. There is also art market which sells variety of typical Balinese souvenirs, like shirts, Balinese cloth, udeng (Balinese cap), hats, sleepers, accessories, jewelries, paintings, sculptures, and other interesting stuffs. If you are hungry, you do not need to worry where to find something to eat. Many restaurants and shops are available in this area providing you various selections of dishes to be tried. 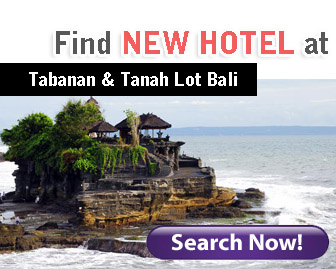 By buying the entrance ticket, every visitor will automatically get an accident insurance from the administrator of this area. The same rule is also applied for the parking ticket. You can visit this temple with ease because your vehicle also gets insurance. From the parking area until entering the area of the temple, you will see the shops and merchants, besides some shops mentioned above, there are also merchants offering shell necklaces, photo frame, temporary tattoo, drinks, even Polaroid/instant photo.