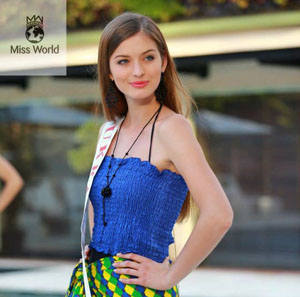 The historical and the oldest beauty pageant in the world, Miss World had been officially started on Sunday, 8 September 2013 in Mangupura Ballroom, Westin Nusa Dua Hotel, Bali. In that grand opening show, all the 130 contestants from all over the world performed charmingly with beautiful gowns which were designed by talented Indonesian designers.

In the opening ceremony, some of the finalists also showed their skill in dancing Fan Dance. In the end of the show, all of the contestants performed once again in various Indonesian traditional costumes. Grand opening ceremony of Miss Worid 2013 was opened by kecak dance which was performed by Balinese artist, I Ketut Rina with 150 dancers consists of adults and some children. Kecak dance is one of the famous Balinese dances. This dance shows a fragment of Ramayana story when the monkey troops helped Rama to face the evil Rahwana. Besides kecak dance, other performances were also done by some Indonesian musicians and singers who sang some national and traditional songs of Indonesia. This grand opening ceremony was also attended by the Miss World 2012 Yu Wenxia from China and Julia Morley, the leader of Miss World Association who is also the wife of Eric Morley the founding father of Miss World. Besides that, Liliana Tanusudibjo who is the founder of Miss Indonesia also presented at the show. Since their arrival in Bali Island, the contestants have followed the quarantine phase and some activities arranged by the committee of Miss World 2013. 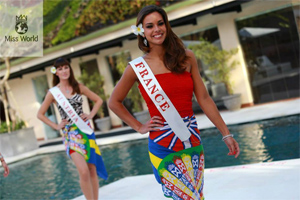 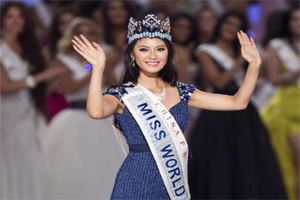 After the opening ceremony, the next day, the finalists must follow Miss World Beach Fashion 2013. Uniquely, the bikini contest which used to be a routine in this event is now changed into Balinese sarong contest. This (temporary) change is due to Indonesian which fully respects the eastern culture emphasizing on dressing courtesy. In this contest, the delegation of Indonesia, Vania Larisa was in TOP 11 and ranked fifth from all of the contestants.

10th of September 2013, all of the Miss World finalists visited and prayed in the greatest Hindu temple in Bali, Besakih Temple. The temple which stands firm on the foot of Agung Mountain is located in Karangasem Regency, Bali. Wearing Balinese sarong and unrevealing dresses, most of the finalists was amazed by the biggest temple in Bali and said that it was such a new experience for them. Led by the holy priest of the temple, the finalists prayed solemnly in the tranquility of this temple. After praying, these girls were taken to take a look around the temple and know more about the famous, beautiful, and holy Besakih Temple. It was such a valuable experience since they got so many insights of history and culture of Bali. After finishing their tour in the Besakih Temple, the contestants also got a chance to learn Balinese dance with some children around the area of this emple. The trip to Besakih was ended by taking photograph which the background was this temple’s beauty.

The trip was then continued to visit Rudana Art Museum which is located in Ubud, Gianyar Regency. This museum was established by a painting collector named Nyoman Rudana and was officially inaugurated by President Soeharto at Desember 26th 1995. This museum has more than 400 paintings and statues from various Balinese artists and also foreign artists who found Bali as their home.

Besides visiting a lot of places in Bali, the finalists of Miss World 2013 is also planned to visit Yogyakarta before they land on Jakarta and follow more activities. Finally they will give their best in the Grand Final of Miss World 2013 which is planned to be held in Sentul International Convention Center, West Java, on Saturday 28th of September 2013.