This September, Bali is visited by pretty women from all around the globe. They are not ordinary women, because they are the “princess” from their respective country. They will compete in a well known beauty pageant, Miss World which now is held in Indonesia. Miss world is the biggest and the oldest beauty pageant in the world. This contest was started in United Kingdom in 1951 which was founded by Eric Morley. The organization center is located in United Kingdom and now is led by the wife of Eric Morley, Julia Morley, after the founding father died in 2000. Miss World also owns franchises in more than 100 countries. Since founded in 1951, Miss World Organization has collected some charity funds for children all over the world. Miss World was started from bikini contest which at that time was started to be introduced to public. Miss World is under a big organization which every year holds the pageant followed by hundreds of beautiful ladies. One of the requirements for being the contestant of Miss World is being able to win the national beauty pageant in their respective country and become the “Miss”; or delegated by the license holder of Miss World in that country. The first Asian who won the Miss World was Reita Faria from India, when Miss World Pageant 1966 was held in Great Britain.

This year, this contest is held in Indonesia. After waiting for about 62 years, finally this country is trusted to be the host of this big event as well as the first South Asian country to hold such an event. Bali Island is chosen as contestants’ temporary resident and quarantine center for one month. Here, these Misses must follow a thigh schedule of activities, including learning about Bali and Indonesia. Besides Bali, Jakarta is the other place for this event. It is planned that Jakarta will the place for the Miss World 2013 final venue, which will be held in Sentul International Convetion Center, West Java, on Saturday September 28th 2013. Miss World 2013 is followed by 131 contestants which are the delegations of various countries. This year, Indonesia is represented by the winner of Miss Indonesia 2013, Vania Larissa which will compete against the other 130 contestants. Since now, Indonesia has followed this beauty pageant for 11 times. 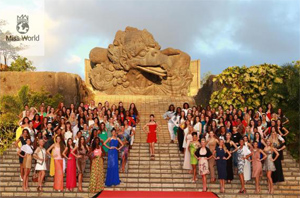 During their quarantine period in Bali, the contestants will also be introduced with the diversity of culture in Bali and Indonesia. After they arrived in Bali, these girls were taken directly to Tanah Lot; a famous beach tourism object which is well known for its amazing sunset in Tabanan. Besides Tanah Lot, during the quarantine and judging phase the contestants will also visit the other tourism objects in Bali such as Garuda Wisnu Kencana (GWK) where giant statues of God Wisnu and Garuda Bird stand tall between the firm limestone rocks; Rudana Museum in Ubud; Bali Safari and Marine Park; and Besakih Temple which is located in the foot of the Agung Mountain in Karangasem and is the biggest temple in Bali. In Bali, Miss World’s activities will be centered in Nusa Dua, a well known tourism area.

The selection of Indonesia as the host of Miss World 2013 is a great opportunity for this country to be able to introduce and promote the diversity of culture in Indonesia and especially Bali. Bali as one of the world’s tourist destination is one of the most attractive islands. Moreover, this island is very famous for its hospitality and interesting nature and places.

Bali has a lot of amazing tourism areas, beautiful beaches, and various kinds of culture and tradition which is different even for the other regions of Indonesia. Bali also has a lot of historical places which add more value to its tourism sector. With the holding of this Miss World Pageant 2013 in Bali, it is expected that all people in this planet can witness the beauty and uniqueness of nature and culture in Bali, and Indonesia.