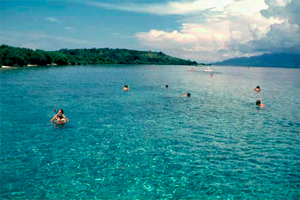 Menjangan Island is one of the uninhabited small islands which are still the part of Bali Island. This island is located about 10 km to the west of Bali Sea. Menjangan Island is the part of West Bali National Park. From Denpasar, this island can be reached around 4 hours by vehicles, and situated around 60 km from the famous Lovina Beach. “Menjangan” is actually a Balinese word means “deer”. Indeed, this white sand island is named like that because a group of deer lives freely in this island.

Although it is just a small uninhabited island, Menjangan Island is never empty from visitors. Besides the tourists, Hindu people also almost every day come to this for praying because the existence of a complex of holy temple on this island. In Menjangan island, there are 8 temples which become the visitors destination. One of them is Segara Giri Dharma Kencana Temple. This temple is one of the historical temples in Bali which is highly related to the holy journey of a Hindu priest called Dang Hyang Siddhimantra to Bali. It was said that long time ago, Dang Hayang Siddhimantra was the one who separated Java and Bali which were on a same big island by slasing his magic wand. This temple was built as the token of appreciation from his followers. The word “Giri” means earth or area; “Dharma” means virtue; and Kencana means line. So, Segara Giri Dharma Kencana Temple means a temple in the line and area of virtue.

Looking to the other side of the island, you can see the beautiful blue ocean surrounding the island. Actually, this pretty white sand island also possesses amazing underwater scene. Coral reefs and sea biota live well because of the healthy environment making this area as one of the best snorkeling spot in Bali. The first snorkeling and diving activity was done professionally in 1978 when the Indonesian Marine Force became a sponsor of a diving gathering from several diving clubs in Indonesia. That gathering was the stepping stone of the Menjangan Island as an international diving and snorkeling spot in Bali. As one of the best diving spots, the area of Menjangan Island is divided into some points with 60 meter drof off and complex stone and reef formation. These stones and reefs create some big and small caves which become the habitat of the corals, various kinds of fish. 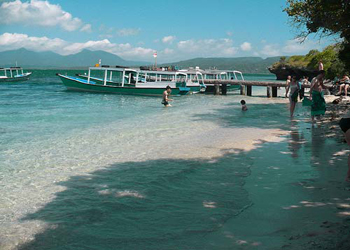 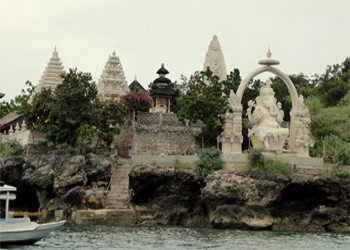 In the depth of 45 meters from the surface, there is a diving spot called the Anchor Wreck. As its name implies, there is a wreck of a ship with its rusty anchor. Besides that, the location is also called Anker or Slave Ship. This ship was suspected as a wreck of a Dutch ship in the 19th century which was the carrier of Balinese who would be sent to Batavia (now Jakarta) as slaves. Inside the ship, there are so many chests found containing china and glass bottles. If you dive around this wreck, it is highly possible that you can see some turtles and sharks. There are some diving spots which can be found in this island. The area called Eel Gardens located in the 40 meters diving spot is the best spot on the west of Menjangan Island. As its name implies, in this area there is big groups of garden eel and sea fans colony. Next, the Secret Bay is a paradise for the macro-photographer, video-operator, and sea biologist. In this spot, there are so many rare species including various kinds of sea horse.

If you want to visit Menjangan Island and enjoy the beauty of its sea, the main transportation is boat which can be found in Teluk Terima Village. Another access for reaching the island is a small pier in Banyuwedang gulf. Crossing to Menjangan Island needs approximately 30-40 minutes. With Rp 40,000 – Rp 50,000 per person, we can rent snorkeling equipments. If you want to try the Sharing Boat plus snorkeling package, you can also get it for Rp 250,000 per person or Private Boat for Rp 1,200,000 for maximum 5 people. Usually, those prices have included boat rent, snorkeling equipments, guide, entrance ticket, and life insurance.

Because this island is very small and uninhabited, there will be no restaurants or minimart found there. If you want to visit Menjangan Island, make sure to bring enough supplies, medicines, and other necessary things so you can fully enjoy the charm of Menjangan Island.