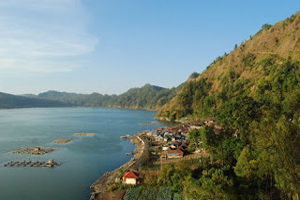 Trunyan is a name of a village in the area of Batur Mountain, Kintamani, Bangli. This village is very famous for its uniqueness. What is the difference and uniqueness that this village has? Let us see!

To reach Trunyan Village, you need to cover a distance for about 65 km from Denpasar and about 23 km from Bangli City. Along the way, you will pass Penelokan, a place where you can see Batur Mountain and its surrounding clearly. From here, you can also see the beauty of Batur Lake and feel the fresh air from the highland of Bali. The remains of the frozen lava around the mountain also become an attraction for the tourists. Besides that, there is also Toya Bungkah hot spring which could be found in the foot of the mountain, near the lake. This hot spring is a perfect place for relaxing your tired muscle after taking a long distance.

To ensure easy access for the visitors to go to Trunyan, a boat dock is now built on the lake in Kedisan Village. To cross to Trunyan, you can rent the boat for Rp 250.000 each which could contain up to seven persons. Once you get on the boat you can enjoy the sensation of cruising the Batur Lake, going around the Lake, and at the same time heading to Trunyan Village. In one hour, you will arrive at this unique village. 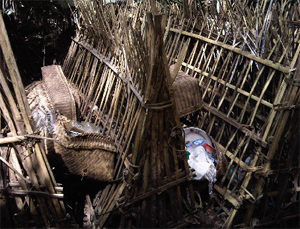 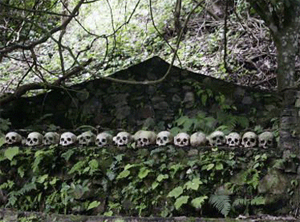 After setting foot in Trunyan Village, you can see directly that this village is surrounded by green hills and of course Batur Lake. Reputedly, there is a Taru Menyan tree which radiating fragrance around the village.
According to the local story, this fragrance even once attracted King Gede Pancering Jagat to visit this place from far away. In this place, he met Ida Ratu Ayu Dalem Pingit around the tall pines. It is said that in that place, they married each other watched by the residents of the tall pines forest which at that time was still hunting for food. The Taru Menyan tree apparently was the one that turned into a goddess which is none other than Ida Ratu Ayu Dalem Piningit; the wife of King Gede Pancering Jagat.

Before doing the wedding ceremony, the King asked the citizens to build a village named “Taru Menyan” which slowly changed and now become “Trunyan.”

Trunyan has a lot of uniqueness, but the most attracting one is its unique funeral ceremony. Not like the typical Balinese Hindu which do “Ngaben” or cremation ceremony for the deceased, in Trunyan the corpse of the local residents are not incinerated, but only put on the graveyard without buried. This tradition is related to the Taru Menyan trees which grow around the village. It is believed that the fragrance of the trees have been absorbing and neutralizing the odor from the decayed corpse.

Trunyan has three kind of graveyards which according to the local tradition, could be classified from age, the completeness of the body, and the process of the death. The main graveyard is the holiest and the best one. The corpses that are put here are the corpse which have complete body parts and normal way of death (not by suicide or accident). The second graveyard is for the babies, teenager, and unmarried people. However, the rule is still the same with the main graveyard. The third graveyard is called “Setra Bantas” which is prepared for handicapped people and people whose death process was not normal, like suicide or accident.

From those three, the most interesting one is the main graveyard. This graveyard is only 400 m in the north of the village. The corpse are left on the ground covered only from the feet to the chest and around the corpse, bamboo fences are used for separating it from the others. There are seven pits for the corpse, and if all of them are occupied, the older corpses are taken and replaced by the new one. The older corpses will be just put beside the pit. So, do not get surprised if you can see so many human bones are scattered around this graveyard. Exactly, those bones are the main uniqueness and also attracting power of this place.

Another uniqueness of Trunyan are the archaeological remains. Trunyan inscription in the 891 year of Saka said that there is a Temple called Pancering Jagat, like the name of the name of the king that built this village. In this temple, there is a holy building with seven roofs and inside it, there is a 4 m tall megalithic stone sculpture which is very sacred for the local people. Besides that sculpture, there is also Barong Brutuk Dance which is believed as the manifestation of King Pancering Jagat.