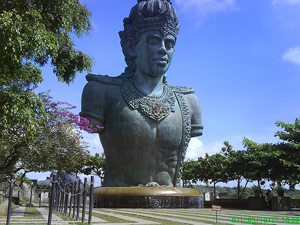 This is it! a monumental and fascinating masterpiece of Bali Island. Garuda Wisnu Kencana Cultural Park or usually know as GWK is an excursion park and art monument in the southern part of Bali. This place is located in Ungasan-Jimbaran Hill, Nusa Dua, Badung, approximately 40 km in south Denpasar.

Garuda Wisnu Kencana stands on a limestone highland and from there, amazing panorama of the southern coastal area of Bali with beautiful natural background could be seen clearly. This statue is located in the height of 146 m from the ground or 236 m above sea level. In this cultural park area, it was designed to build a landmark of Bali in the figure of Lord Wisnu giant statue riding a Garuda in about 12 m height. The statue was designed by a famous Balinese sculptor, I Nyoman Nuarta. This monument is going to be developed as cultural park and become an icon for Bali and Indonesian tourism. Garuda Wisnu Kencana statue is a modern manifestation of Balinese ancient culture and tradition.
Lord Wisnu in Hinduism, is a God of universe maintainer and guardian riding a Garuda (mythological eagle). This masterpiece was inspired by Adi Parwa Story in the episode when Garuda showed his devotion and sacrifice to save his mother from slavery. Then, Garuda devoted himself to Lord Wisnu becoming Wisnu’s mount and granted full protection from the God. This story was also carved in the Kidal Temple reliefs, which is located in Malang, East Java. 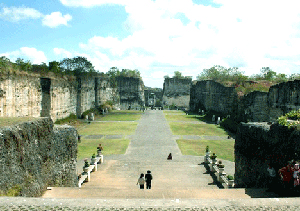 Lord Wisnu is represented as a source of wisdom and guardian. He is also represented riding a Garuda bird who is the symbol of power and prosperity. Garuda Wisnu Kencana is a symbol of culture-based natural balance. In the concept of Tri Murthi, Wisnu’s duty is to maintain the universe and Garuda is Wisnu’s mount as the symbol of selfless devotion. Garuda is pictured in a form of a human with eagle’s head, wings, and tail. He has white face, red wings, and giant golden body which could hinder the sun light. In Japan, Garuda is also a mythological bird in form of half human, half bird. The Japanese call it Karura and in Thailand it is called Pha Krut. In fact, Indonesia and Thailand are both using Garuda as the national symbol.

Garuda Wisnu Kencana Statue is expected to be able to keep the balance between “sekala” or real world and “niskala” or unreal world so the harmony of universe could be maintained. Garuda Wisnu Kencana Statue is a symbol of nature and world saving. This cultural park is also meant to educate people to sustain the cultural inheritance as long as possible.

Garuda Wisnu Kencana is a the biggest mega-project in Bali. The plan is building a statue with 146 m height and Garuda’s wings expanse reaching 66 m with 4000 ton approximate weight. From the area total size of 200 ha, at the moment only 100 ha used and the building progress still in the 15 %. Right now, only hands and half body of Wisnu and also head of Garuda are ready. 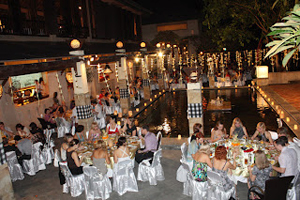 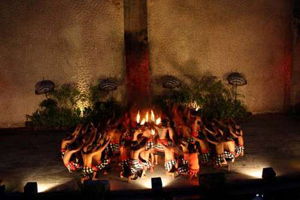 Made from the mixture of copper, brass and steel at some parts, this statue is going to give the visitors a visibility until 20 km, which means that this statue will be observable from Kuta, Sanur, Nusa Dua, even Tanah Lot. When it is finished, 4000 ton gold mosaic would be posted as the decoration.

However, this statue building progress does not fulfill the target. GWK was built in 1997 and planned to be finished in 2005. Nevertheless, the project was once stopped because of the insufficient funds. It is estimated that around 600 billion rupiahs will be needed to make it done. If this project is finished, it would be the largest and the highest statue in the world, leaving the famous Liberty in the second place with its 46 m height and 204 ton weight.

As a matter of fact, Garuda Wisnu Kencana is also a name of Balinese dance. This traditional dance is danced by 3 male dancers as the Garudas and 2 female dancers as Lord Wishnu and Goddess Laksmi. It was firstly shown in 1997 art exhibition in Bandung and Pesta Kesenian Bali XX (Bali Art Festival) in 1998. The dance was created by I Nyoman Cerita as the choreographer and I Gde Arya Sugiartha as the composer. This dance tells the story of Wisnu’s journey to find Tirta Amerta or immortal holy water which is assisted by Garuda and Goddess Laksmi.