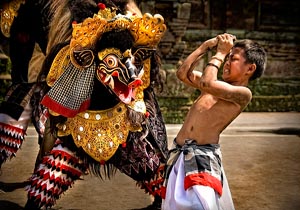 After posting about Barong Dance, now balitour.net will try to explain the kinds of barongs which exist in Bali. Besides Barong Ket which is often performed for tourism purpose, there are also other kinds of barongs such as Barong Bangkal, Barong Brutuk, and so forth. Below will be explained those kinds of Balinese Barong. 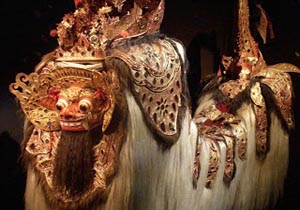 Barong Ket is performed by two dancers called Juru Saluk or Juru Bapang. The first Juru Bapang plays the role as head, and the second as tail. In a show, Barong Ket is oftern performed fighting Rangda, an evil witch with scary face. The fighting between Barong Ket and Rangda is the symbol of the eternal war between virtue and evil in the universe. Barong Ket Dance is usually accompanied by gamelan (orchestra) Semar Pagulingan.

Barong Bangkal is a barong with boar form. This dance is usually performed by “Ngelawang” or dancing from house to house around a village in the celebration of Galungan-Kuningan days. This barong is also a good entertainment for children, because while Ngelawang this barong usually chase the kids who watch the performance. Instead of frightened, these kids usually get happy and excited, then try to provoke Barong Bangkal to chases them. This barong is performed by two dancers with Gamelan Batel/Tetamburan background music. 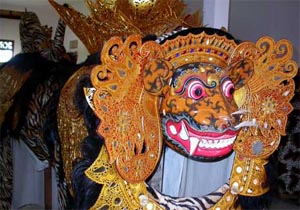 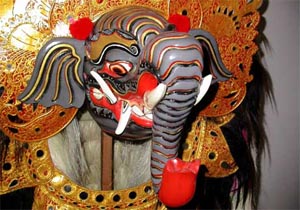 Gajah means elephant. As its name implies, Barong Gajah is in a form of elephant. This kind of Barong is in the category of rare because of its sacredness. Barong Gajah can only be seen in some villages of Gianyar, Tabanan, Badung and Bangli. This barong is performed by two dancers as head and tail. Only on special occasions, this barong will be used for Ngelawang around the village. This barong performance is accompanied by Gamelan Batel or Tetamburan. 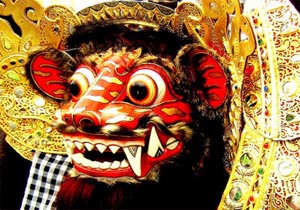 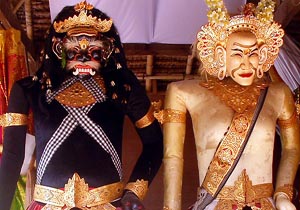 Barong Landung is a human-like barong with very tall body. The height of this barong is equal to two man’s height. The male figure is called Jero Gede, meanwhile the female figure is called Jero Luh. Reputedly, this barong was made for repelling the evil spirits who created disasters. Balinese believed that these spirits were the subordinates of Ratu Gede Mecaling, the ruler of spirits world in the South Bali Ocean. One day, a holy priest came up with an idea for deceiving these evil spirits by creating barong similar to Ratu Gede Mecaling who was very tall, black, and fanged. The barong was then paraded around the village. Apparently, this effort works well. The evil spirits thought that the barong was their master and then escaped scared. Until now, in some villages this barong is still paraded around the village to expel disasters. 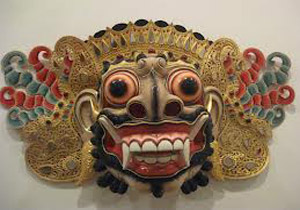 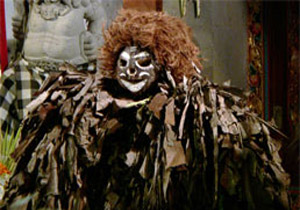 Among all the barongs in Bali, Barong Brutuk is the rarest kind. This barong could only be found in Terunyan Village, an isolated area across Batur Lake, Bangli which is also famous for its unique funeral process. Barong Brutuk has a more primitive form compared to the other barongs. The mask of this barong is made from coconut shell, while the costume is from dried banana leaves. This barong symbolizes the holy spirits who are the subordinates of Ida Ratu Pancering Jagat whose spirit dwells the Pancering Jagat Temple. The dancers are also not haphazardly chosen. The one who is given permission to perform this barong is a sanctified adolescent. Barong Brutuk is performed by dancing with whip while running inside the temple. Barong Brutuk is accompanied by Gamelan Beleganjur or Bebonangan.