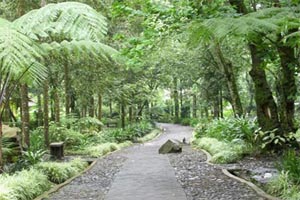 Coban Rondo is the name of a waterfall located in Pandesari Village, Pujon District, Malang. This place could be reached in 30 minutes from the city of Malang. This waterfall has 84 meters height and located 1,135 meters above sea level. The water of Coban Rondo is originated from a water spring in Cemoro Dudo, in the slope of Mount Kawi with 150 liters per second debit in the rainy season and 90 liter per second in the dry season. The average rainfall is 1,721 mm/year, with wet months are between November and March, and dry months are between April and October with average temperature around 22°C.

Before becoming Coban Rondo, on top of this waterfall there is a twin waterfall called Coban Manten. The water from the both waterfall flows below into one becoming Coban Dudo. Then, the water from Coban Dudo flows to Coban Rondo and becomes the waterfall. The source from those three waterfalls is located in Kepundan, a treeless land situated on top of the Coban Manten. If you want to see all the waterfalls and its source you need extra energy and carefulness, because the path is very slippery and long between 3-4 kilometers.

There is a story behind this waterfall name. Once upon a time, there was a new married couple. The bride’s name was Dewi Anjarwati from Mount Kawi, meanwhile the groom’s name was Raden Baron Kusumo from Mount Anjasmoro. One day, in the 36 days after their wedding ceremony, Dewi Anjarwati asked her husband to visit his hometown in Mount Anjasmoro. However, the parents of Anjarwati strictly forbade them to go, because the age of their marriage was still 36 days or in Javanese tradition called “selapan.” However, this couple insisted to go regardless of any risks that they might face.

In the middle of their trip, this couple met an unknown man named Joko Lelono. Apparently, this man was dazzled by the beauty of Dewi Anjarwati, and tried to take her away. The decision of Joko Lelono led to a fight between him and Raden Baron Kusumo. To save his wife, Raden Baron Kusumo asked his assistants or also called “puno kawan” to hid Dewi Anjarwati in a place with a “coban” which means waterfall. The fight between Raden Baron Kusumo and Joko Lelono was so fierce that both of them finally killed each other. The death of these two men made Dewi Anjarwati became a widow which in Javanese called “rondo.” After that tragedy, Dewi Anjarwati still lived behind the waterfall and contemplated her fate on a big rock under the waterfall which is still exist until now. Based on that story this waterfall was then named COBAN RONDO which means “The Widow Waterfall.” 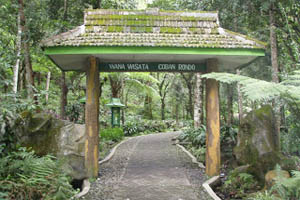 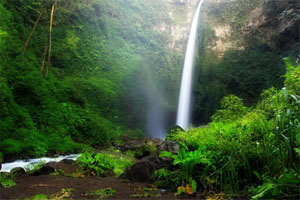 Coban Rondo has the distance of 12 km from Batu Town or approximately 24 km from Malang City which could be reached within 1 hour. The access to this waterfall is very easy with well and flat road. If you take the highway heading Batu-Pujon, Malang, after the winding road you will arrive on the top area of the hill. There, a big sign board will show you the way to Coban Rondo.

Two kilometers before entering Coban Rondo, a big board written “Welcome to Wana Wisata Coban Rondo” will welcome you. After that, the road will descend and the forest atmosphere could be felt. The parking area is located in the sloppy area. There are also a lot of merchants and food stalls there. After this area you could continue to walk climbing ascending road for two minutes before finally arriving in the waterfall.

If you use public transportation, you need to take the bus heading to Malang. After that you need to get on a “bemo” or a small minibus from Arjosari Terminal to Landungsari. Then continue by taking a bus heading Kediri via Pujon. You must stop right at the Buffalo Statue which is the entrance to Coban Rondo. You can rent a bike or “ojek” to reach the parking area. From the parking area, you will need to walk around 200 m to see the waterfall. The entrance ticket for this tourism object is Rp 3000. Meanwhile, the parking ticket for car is Rp 3.000 and bike is Rp 1000.

Inside the area of Coban Rondo, there are a lot of food stall offering affordable but delicious foods. There are also open stage, camping ground, and toilet. Inns could be found around the area of Songgoriti, around 5-8 km from Coban Rondo. The price is also affordable, but these places are more than enough to stay over.