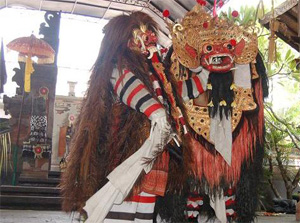 Barong dance is a Balinese traditional dance which is inherited from pre-Hindu culture that existed in the past. This dance tells the story about eternal fight between the virtue (dharma) against the evil (adharma). The virtue is symbolized by Barong, a mythological creature which has four legs, and looks like a lion with golden armor. Meanwhile, the evil is symbolized by Rangda, an evil witch whose face is scary with long pointed out canines and fiery tongue. Some people say that, the word “Barong” is derived from word “bahruang” which means “beruang” (bear), a mythological animal which is believed possessing magical power as the virtue guardian.

Actually, there are various kind of Barong dance usually performed in Bali, whether in a show or in a traditional ceremony. The example of them are Barong Ket (the most common barong), Barong Bangkal (boar), Barong Gajah (elephant), Barong Asu (dog), Barong Brutuk (made from dried banana leaves) , and Barong-barongan. However, amongst those kind of Barong, Barong Ket or Barong Keket is the one which is often performed in front of the tourists since this Barong has the most complete costume and story. Usually, the Barong that you could see in a show is not the one that is sacred by the Balinese, but the Barong that is specially made solely for the behalf of a show.

Barong Ket costume usually describes the mixture of lion, tiger, or ox. Its body is decorated by many ornaments made from leather, small pieces of mirrors, and furs made from the fiber of pandan leaves. Barong is played by two dancers or usually called “bapang” which one of them take the front position playing role as the head as well as front legs, and one of them in the back position playing role as the back legs and tail.

In a glance, Barong Ket is a bit similar with Barongsai which is usually performed by the Chinese. However, the story performed is completely different. Moreover, in Barong story, there are some other characters like monkeys (friends of Barong), Kunti, Sadewa (the son of Kunti), Rangda, and the subordinates of Rangda.

The uniqueness of Barong dance is in the comical elements combined with mythological elements which are mixed into an art performance. The elements of comedy are usually inserted in the middle of the performance to evoke laugh from the audience. In the opening part for example, the monkey which accompanies the Barong on the stage, makes funny gestures and actions. 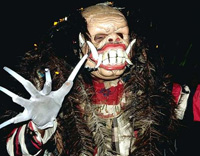 Meanwhile, the mythological elements come from the source of the story which is taken from pre-Hindu tradition when Barong was believed as the guardian of virtue. Mythological could also be seen from the costume of Barong which is made from woods taken in mystical places like cemetery. Besides that, Barong dance performance is usually interspersed with Keris Dance. Keris dance also contains mystical aspects in it, because in this dance a group of people try to stab themselves with keris (Balinese dagger), but surprisingly those sharp daggers could not penetrate their body.

Barong dance could be watched in some locations in Gianyar Regency, like in Dalem Ubud Temple starting at 7.30 pm and some stages in Batubulan Village starting from 9.30 am.
To be able to watch this performance, you must go to Batubulan or Ubud. From Denpasar, Batubulan is approximately 10 km and could be reached by 20 minute driving whether using personal vehicle or public transportation. Meanwhile Ubud is about 25 km and could be reached by 50 minute driving. Besides that, for your convenience you could also use travel agency service to watch Barong dance show. Usually, every travel agencies in Bali has fix schedule of Barong dance show in Batubulan and Ubud, and they could easily provide you with the pre-ordered ticket.

The entrance ticket for this show usually costs you Rp 50.000 – Rp 80.000 per person. With that price, you will also get a story guidance in the form of books or pamphlet available in various language like Bahasa Indonesia, English, French, Italian, Japanese, and Mandarin.

After watching the show, you do not need to rush back to go to other places because there are so many attractive places located in both Batubulan and Ubud. You could buy some souvenirs or arts sold in the shops along the road of the two villages. Some tourists attractions like zoo, temples, art markets, and monkey forests are located near the location.