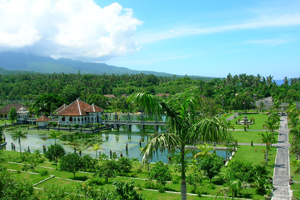 Taman Sukasada was a park or resort palace of Karangasem King which now is better known as Taman Ujung Karangasem. This park is located in Tumbu Village, Karangasem, about 5 km southeast from Amlapura City. It was built by King of Karangasem, I Gusti Bagus Jelantik, who had title Anak Agung Anglurah Ketut Karangasem. With a perfect concept, this place is a pride of Karangasem citizen. In the past, this park measuring almost 400 hectares, but now only about 10 hectares because the land of this park was divided and given to the local residents in the era of land reform. The ownership of Taman Ujung is now fully inherited by the descendants of Karangasem Royal Family, making the status of this area become a private property. However, tourists are still allowed to visit this glorious kingdom park.

Taman Ujung is one of Balinese masterpieces which was built in 1909 by King of Karangasem, Anak Agung Anglurah Ketut Karangasem involving a Holland architect named van Den Hentz and also a Chinese architect named Loto Ang. Besides those experienced architects, the construction of Taman Ujung also involved Balinese traditional architects or “Undagi” and Mr. Wardodjojo, a technician from government’s Public Works Service as an advisor. Before it was built, Taman Ujung was actually a park named Kolam Dirah which was built in 1901. So, the architects and technician at that time only renovated and developed this previous park into a greater one. 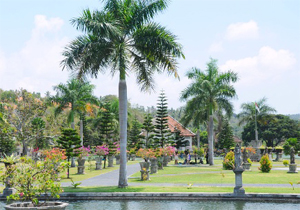 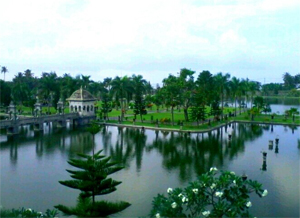 The construction process took time for 12 years and it is finished in 1921, but the development was continued to enhance this park. In 1937, Taman Sukasada (Taman Ujung) Karangasem was inaugurated through “maligya” ceremony, recorded on two marble inscriptions written in Latin and Balinese letters with two language, Bahasa Indonesia and Balinese. The inscriptions were posted on the wall of Bale Warak.

According to Balinese cosmology, Taman Ujung Karangasem is a meeting point of the mountain and sea which are represented by Lempuyang Mountain in northeast, Agung Mountain in west, and sea or Lombok Strait in the east which is only a few meters near from this park. The concept of mountain and sea is very respected and often practiced by Indonesian traditional people. 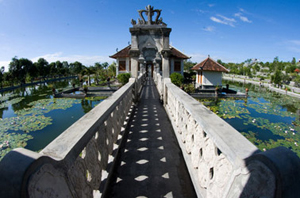 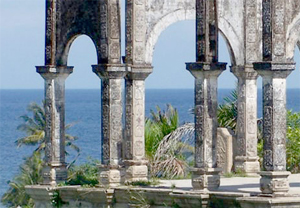 Before 2001, the beauty of Taman Ujung Karangasem could not be seen by anybody because of severe damages taken from the eruption of Agung Mountain in 1963, Seririt earthquake in 1978, and Culik earthquake in 1978. For almost 25 years, the buildings in Taman Ujung Karangasem were broken and abandoned without any effort for reconstruction. In 1994, the government investigated the level of this place’s breakdown and then tried to repair and remap the park. In 2001, they successfully repair two canopies and some wayang reliefs.

In 1999, World Bank gave support through conservation study done by Culture Heritage Conservation. Finally, in 2002 World Bank gave grants for the reconstruction of Taman Ujung which were used to repair the fences, gates, and pools. In 2003, the refinements were continued on Bale Warak, Bale Gili, Bale Kambang, Bale Lanjuk, Bale Kapal, and the others. The conservation project was totally finished in May 2004 with estimated funds spent reaching 10 billion rupiahs. 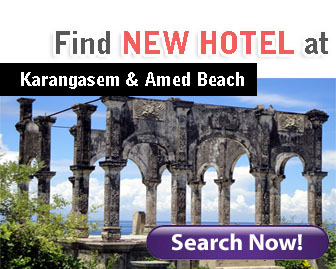 Finally, at 7th of July 2004, Taman Ujung Karangasem was once again inaugurated as a tourism object through “melaspas” ceremony. The official opening ceremony was attended by the Governor of Bali Province. Now, the condition of Taman Ujung is amazing, resulting a crowded visits from both local and foreign tourists. The beauty of Ujung Beach near the park also adds another value of visiting this tourism object.