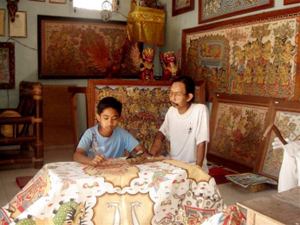 Kamasan Village is a center of Balinese traditional painting and sculpture which is located in Klungkung District, Klungkung. From Kuta, this village is approximately 43 km to the east. This village could be reached by any vehicles or public transportation, because all of the road heading to Kamasan is in good condition. From Kuta, you can go through Denpasar, and then Ida Bagus Mantra Bypass. After that follow the route heading Klungkung. At Batu Klotok, turn left and you will arrive at Gelgel Village. From here, you are only a few meters away from Kamasan Village.

Kamasan is famous for its community of Balinese traditional painting artists. The originality, authenticity, and long time development resulting a separate style of Balinese paintings which is called Kamasan Style. Although the materials that are used to paint have undergone evolution, the theme of the painting is still the same, about wayang (Balinese puppet) characters. Actually, this village’s artists do not only good in painting, but also the other arts like gold and silver sculpting and the latest popular art, bullet sculpting.

The wayang characters who are usually used for the theme of the paintings are the characters from Ramayana and Mahabharata epics, or Arjuna Wiwaha and Suthasoma stories. As a result, the paintings and sculptures from Kamasan are rich of original traditional value and historical value which its integrity are still maintained until now. According to international collectors, Kamasan painting style is still pure, mild, and sophisticated but with less unnecessary detail and also very bold in the aspect of the message of the story. Those wayang-centered paintings and sculptures are actually the attracting power of the artists and tourists to come to this village.

This village is also completed with an exhibition hall and art shop, located about 50 meters on the west of Sangging region. A rehearsal painting studio was also built by Nyoman Mandra in his own house. The tourists who visit Kamasan are often come to the artists house and workshops to see directly the process of creating paintings or sculptures. The access for every place in this village is also in good condition, so vehicles can easily pass it. There is also another alternative for the tourist who want to travel around the village by riding Balinese traditional gig, Dokar.

Kamasan Village had been known as an old village where all the blacksmiths and craftsmen live. This village started to be recognized and operated in 1380-1651 under the power of King Ida Dalem, the ruler of Gelgel Kindom. He ordered the blacksmiths and craftsmen to make sculptures on gold or silvers in the form of bowls, dishes, and palace ornaments to be used as decoration in Suweca Linggaarsa Pura Gelgel Palace. Besides the art of sculpting, the art of painting was also developed in the form of wayang painting. The paintings were painted on fabrics and then used as flags, banners, and other decorations which decorated the palaces and temples of Gelgel. This village underwent its golden era under the reign of King Dalem Waturenggong in 1460-1550. Banjars (residences), like Sangging and Pande Mas were used as guild, due to construction of houses and workshops for the artists where they can live, work, and serve the King until death.

The other history records told that the traditional wayang painting style/technique was developed in Kamasan and other regions of Bali since the era of Majapahit Kingdom. Between 14th century until 18th century, Bali Island was under the reign of Dalem Kings, the descendants of Sri Kresna Kepakisan from Majapahit. 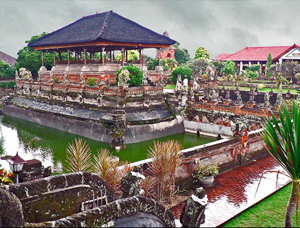 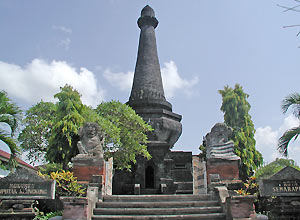 While Kepakisan Dynasty controlled Bali, this island reached its golden era. Some history records also told that in that era, Bali were a big and strong kingdom, with its power covering East Java, Lombok, until Sumbawa. The most famous king at that time was Sri Waturenggong, the grandson of Sri Kresna Kepakisan. Under the reign of King Dalem Waturenggong, it was said that the arts and culture developments were also underwent a golden era because the king himself was very fond of arts. Kamasan was built as a one of the kingdom centers which specially administered art, culture, education, and religion sector.

Now, the development of the products from Kamasan’s craftsmen has been varied, not only just gold and silver sculptures, but also in other form like copper, brass, and bullet. The paintings and sculptures of Kamasan have been very popular and ordered by both local or foreign tourists. With the increase in tourism sector, now art shops and hotels in Klungkung, Gianyar, and Denpasar have been regular customers for Kamasan wayang art products.

If you have passion or interest in art, you must visit Kamasan Village. This village does not only offer products to be bought, but also additional knowledge of Balinese arts.

What you can see around Kamasan Village

1. Kertha Gosa (Courts Of Justice), is a tourism object which is famous for its ceiling painting. This place also use the wayang painting style just like Kamasan. However, the paintings of the Kerta Gosa have undergone numerous changes. It had to be restored after the devastating earthquake in 1917 and then repainted during the 1930’s by Pan Sekan, a master artist from nearby village of Kamasan.