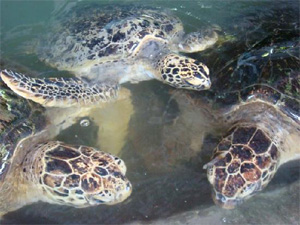 Serangan is a small island located approximately 5 km south of Denpasar, Bali. This 73 hectare island is 250 meters from the beach in southeastern Bali. This island is exactly located south of the well-known Sanur Beach. Administratively, Serangan Island is in the region of Denpasar City and inhabited by 3 thousand people. According to this island’s indigenes, the name “Serangan” comes from the words “sira angen” which means a felling of loving or missing something very much. The use of this name is based on the story of the Bugis sailors who often visited this island in the past. When they landed on this island to drink water they got the “sira angen” condition. It is believed that the water from this island could intrigue this kind of feeling. These sailors felt at home here and did not want to leave this island. The Bugis sailors whose religion are Islam even chose to settle in this island and lived peacefully with the local residents whose religion are Hindu. After that, they built their own settlement which is called Kampung Bugis and this settlement still exists until now.

Besides that, Serangan Island also has beautiful nature landscape, especially the sea which is rich of sea biota. The sand has sparkling golden color which made this island reputed as “Pulau Emas” or “Gold Island”. Serangan Island now is connected to Bali through a bridge. This bridge can only be passed when the tide is low, so when the high tide occurs, this bridge will not be passable. If this thing happens, the visitors of Serangan Island must use boat rented in Sanur, Suwung, or Tanjung Benoa Beach to cross over. In the past before this bridge was constructed, we need about 1 hour to reach this island by renting a fisherman’s boat. Now, we can cross the island only in 15 minutes because of the bridge.

Serangan Island is also known by as Turtle Island. This naming comes from the existence of a green turtle conservation centre in this island. At certain moments, the visitors can see and participate directly in the event of hatchlings release. There is also a vast mangroves area around this island. This mangroves area had been destroyed in the past resulting a disruption to its surrounding ecosystem. Fortunately, that condition was quickly overcome by an intense conservation effort, so now this mangroves’ preservation could be maintained.

Serangan Island is also known having amazing beach and high waves. Just like mentioned previously, the golden white sand in Serangan’s beaches is very beautiful. The high ocean wave also becomes a main attraction for the visitors. In November until April, the tide and wave can be very high, so the surfers will flock around the beach. 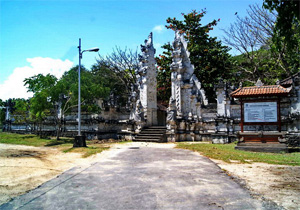 Besides its wonderful landscape, Serangan Island also has a holy temple called Sakenan Temple. It is said that, this holy temple complex was built by Mpu Kuturan in the 12th Century and then continued by Danghyang Nirartha around the 15th Century. According to the legend, these two holy priests also got sira angen by the beauty and spiritual vibration of this island, so that a holy temple was built here. This temple possesses a unique architecture which is a bit similar to Luhur Uluwatu Temple on the southern tip of Bali Island. According to lontar (ancient document) “Usana Bali”, Sakenan Temple was firstly constructed by Mpu Kuturan in the era of Masula-Masuli (couple) Kingdom called Sri Dhana Dhirajalancana and Sri Dhana Dewiketu. The reign of this king was around 1178 until 1255.

The story of Danghyang Nirartha’s journey had become an inspiration of Balinese Hindu. When there was a “Karya” or big ceremony in Sakenan Temple which comes in Kuningan Day, Balinese flocked to this temple. In the past, the visitors of this island must use boat or raft to cross over the sea. When the tide is low, the visitors must be ready to walk around 2 kilometers passing bushes and mangroves. This tradition had gone from time to time until the the bridge connecting Bali Island and Serangan Island was constructed.

Now, this tradition does not exist anymore because crossing is a lot easier by the bridge. Unfortunately, the reclamation project done to this island has taken the predicate of “Golden Island” away from this island. The reclamation has changed the overlay of soft golden sand of the beach into a field full of blinding white rough limestone.