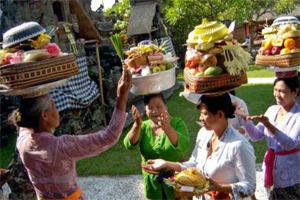 Kuningan Day is celebrated 10 days after Galungan. Same with Galungan, Kuningan is celebrated every 210 days or every 6 month in Balinese calendar which 1 month consists of 35 days. The exact day for Kuningan is Saniscara (Saturday) Kliwon Wuku Kuningan. In this holy Kuningan Day it is said that Ida Sang Hyang Widhi (God) comes to the earth to give his blessing for human race. Balinese Hindu people believe that the ceremony for Kuningan Day must not pass midday, before the God and ancestors’ spirits go back to heaven. There are some typical equipments or offerings for Kuningan Day such as “Nasi Kuning” or yellow rice, “Endongan” as a symbol of offering to God / Hyang Widhi, “Tamyang” as a symbol of danger repellent, and “Kolem” as a symbol of resting place for Gods and ancestors’ spirits.

These equipments also have own meaning such as nasi kuning which symbolizes the prosperity; Tamyang becomes a reminder for the importance of nature law; If we maintain and preserve the nature, it will give us prosperity, but if we do not do so, it will give us disasters; Endongan symbolizes supplies. The most important supply in life is the knowledge and devotion. Thus, by the celebration of Kuningan Day, Hindu, especially in Bali is expected to maintain peaceful life.

Different from Galungan Day, in Kuningan Day people are not obligated to pray in all temples around their village especially if the distance of the temple from home is far. The celebration of this day could also be done at home because it is related to the short duration of this holiday which is only until midday. However, some people still come and pray to the temples around their village just like in Galungan Day, even though it must be started early in the morning so that they do not pass the midday. It could be concluded that the main meaning of Kuningan Day is to beg for safety, prosperity, welfare, protection, and guidance from Hyang Widhi Wasa and the spirits of ancestors. 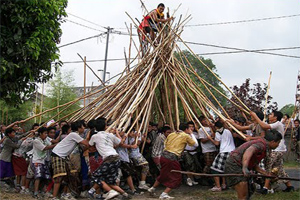 For the tourists, this Makotek tradition will be very interesting to be visited if you are in Bali at Kuningan Day. Makotek / Ngrebeg tradition could only be seen in Munggu Village, Mengwi, Badung. This tradition is a kind of cultural legacy which have been done since the glorious era of Mengwi Kingdom who in the past conquered wide are including East Java. Reputedly, makotek was a celebration party for commemorating the victory of Mengwi Kingdom over Blambangan Kingdom from Banyuwangi, East Java. Until now, this tradition is still celebrated with purpose to ask for God’s blessing, health, and protection for Munggu Village itself. Makotek is celebrated every 6 month in Saniscara (Saturday) Wuku Kuningan which is the day of Kuningan.

Usually, before this procession is started, the participants are asked to pray in Desa Temple. There are requirements for a person to be able to join this procession. First, if there is a man whose family member or relative passes away, he cannot join. Besides that, a man whose his wife is giving birth is also not allowed to join. The name of Makotek itself is derived from the name of bamboos or woods which are collided each other when combined into a form of mountain. So, when these bamboos hit the others they creates a sound of “tek.. tek.. tek..” which is the source of this unique tradition naming.

Actuallu, this tradition was named Grebek which means “keep pushing”. In its process, Makotek is done by hundreds of men from Munggu Village. The age of the participants is also varied starting from 13 until 60. When it is started, each woods or bamboos measuring 3.5 meters will be taken by one participant. Hundreds of those bamboos will be gathered into one forming a cone-like shape. After that, one of the bravest participants will climb this formation and stay on top of the cone. On the other hand, other participants also create the same formation, and one of them also climbs the bamboos and stay on top of it. These two groups will then face each other just like a war. Although this tradition is risky, people are enthusiastic in joining this unique procession. It is often found that these people fall from the top of the formation. However, there are never serious injuries gotten that could make this event stopped.

This tradition is quite known by some tourists, so when the time comes this village will be crowded by both tourists and participants. So, if you are interested in watching this unique tradition, you can directly come to Munggu Village, Mengwi, Badung right in the Kuningan Day.