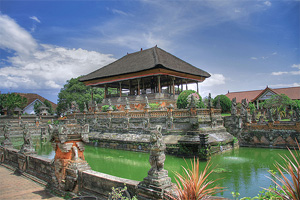 Kerta Gosa is one of the famous tourism objects located in Klungkung Regency. This artistic place is well known by its unique traditional court. This place is located approximately 40 km to the east from Denpasar and could be reached using vehicles in approximately 45 minutes or more through Prof. Dr. Ida Bagus Mantra Bypass Street.

Kerta Gosa is a cultural tourism object which is a part of Kraton Semarapura building compex. This compex had been built in 1686 by the first King to take Klungkung’s throne, Ida I Dewa Agung Jambe. This building was used to be used as a court of justice and also as a traditional ceremony place for the royal family. Besides that, some sources said that the secondary function of this building was related to educational function. It can be seen by the existence of Wayang (Balinese puppets) paintings painted beautifully at the ceilings of the building. Reputedly, these paintings are the series of particular stories with main theme taken from Parwa, Swargarokanaparwa, and Bima Swarga which give guidance about the Karma Phala law (the law of cause and effect of good and evil human actions in his life) and about reincarnation caused by particular sins ever done.

The theme of the paintings at the ceiling of Kerta Gosa is about mental and spiritual education value. These paintings consist of six levels arranged in a tier. The most bottom row tells story of Tantri. The next tier takes the theme of Bimaswarga story from Swargarakanaparwa. The third tier tells the story about Bagawan Kasyapa. The sixth tier is about Palalindon, the ancient meteorology and geophysics which tells about the characteristics and meaning of an earthquake. In the fifth tier, there is the continuation of Bimaswarga story. In the highest tier, the life of nirvana (Gods’ place) is illustrated.

Besides on the ceiling of Kerta Gosa, wayang paintings also decorates a building next to it called Bale Kambang. However, here in Bale Kambang, the paintings illustrate the story from Kakawin Ramayana and Sutasoma. This story theme gives us the clue that Bale Kambang main function is a place for human traditional ceremony (Manusa Yadnya), called Metatah or Mepandes for royal family.

Besides those beautiful paintings, there are also other important relics in this site such as Pemedal Agung. Pemedal Agung is located on the west side of Kerta Gosa which is full of Kraton culture value and Balinese traditional architecture. In the war versus Dutch armies in 28th of April 1908, King Dewa Agung Jambe and his followers died. This memory of tragedy and struggling is now immortalized in Puputan Klungkung monument located across the Kerta Gosa. After that defeat, the main building of Kraton Semarapura was destroyed and changed into a settlement. The highest remain of this complex is Kerta Gosa, Bale Kambang with its Taman Gili and Gapura (Gate) Kraton. Besides that, because it had used as court of justice during the Dutch colonial era in Klungkung (1908-1942), some court’s equipments are still exist until now, such as wooden chairs and table with typical carvings.

All things in the surroundings of Kerta Gosa are the evidence of the existence of traditional customary court in the Dutch colonial periods (1908-1942) and Japanese colonial (1043-1945). In 1930, there was a restoration effort for the wayang paintings in Kerta Gosa and Bale Kambang by the professional painters from Kamasan because the old paintings were already obsolete. The last recorded restoration was in the year of 1960. Both local and foreign visitors who want to enter this area must pay Rp 15.000 for the ticket. This place is a must-see attraction if you visit Klungkung. Besides visiting and enjoying the uniqueness of traditional court in Kerta Gosa, visitors could also see the view of the town and some places near it.