Tana Toraja is one of the regions in Indonesia which has gotten international attention and has become one of the most attractive tourist destinations in Sulawesi Island. Those facts are caused by not only the beauty of its nature, but also the richness of its culture. Tator (stands for Tana Toraja; a popular name given by the tourists) is located in South Sulawesi and possessed total population around 450,000 people. Toraja Tribe lives around mountain area with various cultures that they have. One of its culture which has been very famous for a long time is the unique funeral tradition called Rambu Solo.

The people of Toraja Tribe believe in “Aluk to dollo” or a custom in form of strict traditional beliefs, rules, and rituals which had been set by their ancestors. Although now the majority of Toraja people are Catholic or Protestant, the traditions and rituals of their ancestors are still done until now. In the procession of Rambu Solo, Toraja people believe if the funeral is not held then the spirit of the deceased will create disaster or misfortune to the people that he/she left. The deceased will be treated as a sick people so the body will be taken care and supposed alive. The body is even served with foods, beverages, cigarettes, or betel leaves (traditional snack for its people) Among the people of Toraja, funeral is the most important and expensive ceremony. The richer/more honorable you are, the more expensive your funeral cost will be. In Aluk religion, only the noble families could have a glorious funeral. The funeral of a noble is usually attended by thousands of people and could take place in a few days.

A place for the funeral procession which is called rante is usually set on a spacious field because it will be functioned as the place for the visitors, rice barn, and other ceremony equipments which are made by the family. The sound of flute, song, poem, cry, and mourn are the expressions of grief that the Toraja Tribe show in the funeral. However, all of these things are not doable in the funeral of children, poor people, and low class people. 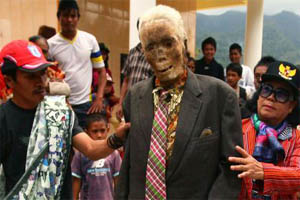 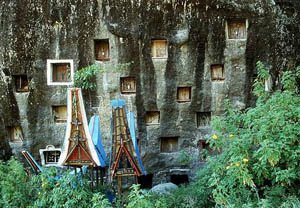 This funeral ceremony sometimes could take weeks, months, or even years after the death, so that the family could collect enough money for completing all the procession in the ceremony. Toraja Tribe believes that death is not a sudden phenomenon, but a gradual process to reach Puya (the world of spirit or hereafter). In that waiting phase, the body is covered by some clothes and put under the Tongkonan (Traditional House of Toraja). The spirit of the deceased is believed still staying in the village until the ceremony is all done. After that, this spirit will start his/her journey to the Puya.

The procession of Rambu Solo which is become the most attractive part for both local and foreign tourists is the buffalo slaughter (Ma’tinggoro Tedong) which slaughter more than hundred buffalo for this ceremony. The more honorable a person, the more buffalo he/she slaughters. The slaughter is done by using Golok or traditional razor. The dead bodies including its head of the buffalo are arranged on the field waiting for its owner who is still in the “deep sleep.” Uniquely, the process of cutting down the neck of a buffalo is using golok in only one swing. This is the typical attraction of Tana Toraja people.

Toraja Tribe believes that the spirit of the deceased needs buffalo for doing trip to Puya, and will be faster if there are more buffalos. The slaughter of buffalos and also pigs are the main procession of funeral ceremony which is completed by music and dance of the youths who try to catch the gush of the blood using a long bamboo. Some of the meat will be given to the guests and then noted because it will be reputed as a debt to the deceased’s family. In the belief of Tana Toraja People there is a principle that said: the higher the place for a body, the faster his spirit will reach nirvana. Actually, there are three ways of funeral: the coffin is put inside a cave, in carved stone grave, or hanged on the cliff. Rich people are usually buried in a carved stone grave which is very expensive and need a month to be finished. In some region, a rocky cave is used as the place to save all the bodies of family. Usually, a wooden statue which is called “Tau Tau” is put in the cave facing outside. The coffins of babies or children are hanged on the cliff using ropes. The ropes usually wore out after a year and then broke, resulting the coffin falls onto the ground.

Besides Rambu Solo Ceremony, there is also another unique ceremony in Tana Toraja which is done by Baruppu people, in the inland of North Toraja. The ritual of Ma’nene is done once in 3 years and is usually done in August before harvest to repel pests and wish for prosperity at the same time. The uniqueness of this ceremony is the embalmed bodies of these people’s ancestors which have been saved inside the coffin for a long time will be taken out and then dressed like a normal human. After recited with prayers, this body will be taken from the coffin and started to be cleaned from head to toe using brush or clean cloth. After that, the body then dressed like a living human and sung by the family before lied down again inside the coffin.