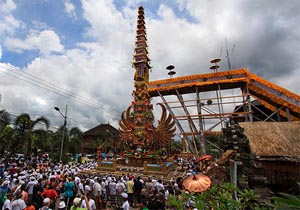 Ngaben is actually a term used by the public class, just like it is organized in Balinese social structure. Meanwhile for the nobles and royal family this ceremony is called Pelebon. Ngaben comes from word ngabuin or ngabu which means “turning into ash,” meanwhile pelebon is derived from word pelebuan which has the same meaning, “turning into ash.”

For Balinese, ngaben is a sacred and important ceremony because by doing ngaben the family of the deceased could free his/her soul from worldly ties. By this ceremony the family hopes that their relative will go to heaven and could reincarnate as a better person or even moksha (united with God).

This ceremony needs a lot of effort, money, and time, so the process could be long. To ease the burden of the cost, effort, time, nowadays Balinese often do a mass ngaben. This way is more affordable for people with low economical condition. With this method, the body or so called layon is buried first until the cost of ngaben could be fulfilled. If it is calculated, using this method, Balinese could save a lot of money. If commonly each family or person needs around 15 – 25 million rupiah for an individual ceremony, with mass ngaben they will only spend no more than 5 million rupiah in total with a complete ceremony. However, for the family with financial sufficiency, the ngaben ceremony could be done as fast as possible. However, they still need to wait for the best day according to Balinese calendar, family agreement, and permission from Pedanda (Hindu priest). Until the determined day, the body will be kept at home. Record for the most magnificent and expensive ngaben ceremony is hold by the Ubud Royal Family which the cost of the so called Pelebon ceremony estimated reaching billions rupiah.

A good day is usually chosen by the priest after consulting and choosing the best day from the Balinese calendar. Preparation is usually made in advance, even before the best day is chosen. During this time, the family will make bade and lembu which are the main equipments for the procession of ngaben. Bade and lembu are created by a team led by an undagi or Balinese traditional architect. Bade is a kind of great tower with multi tier roofs decorated with colorful carved papers, woods, and bamboos which is used as a carrier of the body until it arrives in the graveyard. Meanwhile, lembu is a container of the body while it is incinerated. Lembu means ox, as its name implies, this container is in the form of an ox. Not only ox, some other forms could also be found such as singa (lion), padma, naga banda (dragon, used specially by the royal family), and so forth according to their social status At the day of ngaben, the preparation is started from early morning. In the middle of the day, usually all of the preparations are done and you could hear the sound of vigorous beleganjur orchestra which could take us away from sorrow. The body is carried out and put into the bade before it is paraded to the graveyard. 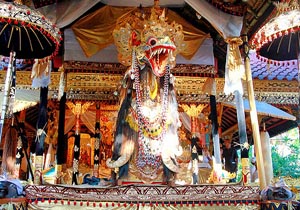 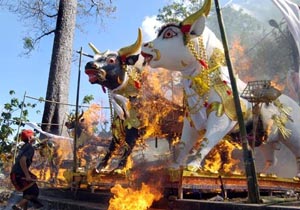 The parade consists of angklung (Balinese music instrument) players, offerings carriers, the blacksmiths, and the relatives and family. This parade creates a rousing atmosphere along the road heading to the graveyard. In every crossroad or intersection, the bade and lembu will be spun from east to south or from left to right three times (symbol of utpti, stiti, pralina) while singing kidung as the symbol of “status improvement” with a hope that the soul of the deceased could get a good place and then could reincarnate as a better person or even moksha.

Arriving in the graveyard, the body is placed into the back of lembu which is believed as the transporter to nirvana. The procession is initiated by a pedanda or priest. When the body is burnt with the lembu, all of the family members will gather around the burnt lembu. The atmosphere is so solemn with the sound kidung which is very touching. It is often found that some of the family members will shed a tear releasing the one that they love. After all is completely burnt to ash, this ash is washed away into the sea or river. For the Balinese Hindu, sea is the symbol of the God’s place gate. Besides that, throwing the ash of the deceased to the sea also means returning the five elements of human body (water, heat, wind, earth, and ether) back to the universe.

Ngaben is indeed an important ceremony for the Balinese Hindu. They believe that mortality is not the end of the life, but the beginning of a new better life. Thus, the death of the one they love must be accompanied with prayer, sincerity, and joy to set him/her free from the worldly ties.