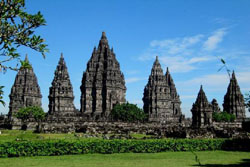 Prambanan consists of 3 temples in the main yard, Vishnu, Brahma, and Shiva Temple. Those temples are the symbol of Trimurti which all of them faces to the East. Every temple has its own companion temple facing West such as Nandini for Shiva, Swan for Brahma, and Garuda for Vishnu. Besides that there are also 2 candi apit, 4 candi kelir, and 4 candi sudut. Meanwhile, in the second yard there are 224 temples.

While entering Shiva Temple in the middle of the area, you will see 4 rooms. 1 room for Shiva statue, while the other three contains Durga (Shiva’s wife) statue, Agastya (Shiva’s teacher), and Ganesha (Shiva’s son). The Durga statue in this room is known as the Roro Jonggrang statue in the legend above. In the north of Shiva temple, there is Vishnu temple. There will be one room contains Vishnu statues. Meanwhile the Brahma temple is located in the south of Shiva Temple and also contains a room full of Brahma statues.

The companion temple which is quite attractive is the Garuda temple located near Vishnu temple. This temple tells a story about a mythological half bird man named Garuda. Garuda is pictured as a man with golden body, white face, red wings, bill, and eagle-like wings. Reputedly, this figure is the Hindu manifestation of Sun God or Ra in Egyptian myth or Phoenix in Greek myth. With his hard effort, Garuda could save his mother by taking Amerta holy water from the Gods. The effort of Garuda is very admired until now and used as the symbol of Indonesia. It was said that the creator of Garuda Pancasila got his inspiration from this temple. Thailand also used Garuda as their national symbol, however in Thailand it is known as Krut or Pha Krut. 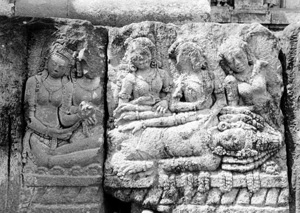 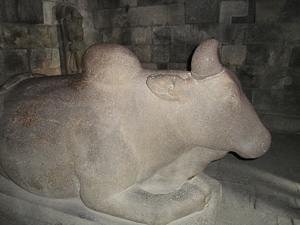 Prambanan also has a relief telling story about Ramayana epic. Another relief also tells about Kalpataru tree who is believed as the tree of life by the Hindu. This relief was drawn flanking a lion. The existence of Kalpataru relief made some scientists drew a conclusion that in the 9th century, the Hindu people of Java had already given a special care for their environments.

Just like Garuda, Kalpataru has also inspired many people. In Indonesia, Kalpataru has become the symbol of environment conservation. This tree of life could also be seen in the “gunungan” which is the opening act for the traditional puppet show in Indonesia.

Interestingly, there are also some bird reliefs around this temple, but this time they are real birds. The bird reliefs in Prambanan are so natural and detail so that the biologists could identify these birds until the type of their genus. For example, you can see a relief of a yellow parrot (Cacatua sulphurea) which has raised a question. Why? Because this species only lives in an island called Masakambing in the middle of Java Sea. The scientists are very curious to research if this bird also lived around Yogyakarta in the past.

This temple got some serious damages from the earthquake in May 2006 around Central Java region. However, now the temple has been renovated and ready to be visited by the tourists. There is also one unique myth about visiting this temple. If you are an unmarried couple, you are suggested not to go inside the temple together with your couple because it is believed that the couple who enter the area of Prambanan will be separated; just like the love of Bandung Bondowoso and Roro Jonggrang. Believe it or not.