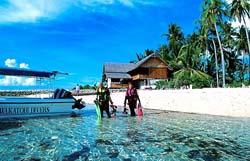 Wakatobi National Park has an area of 1.39 million hectare which possessed a great marine potential. This national park offers a unique and amazing underwater panorama. Wakatobi National Park consists of four big island, Wangi-wangi, Kaledupa, Tomia, and Binongko which is located under the jurisdiction of Wakatobi Region, Southeast Sulawesi.

In 1994, some scientists from Institut Pertanian Bogor (Bogor Agriculture Institute) conducted a survey in the area of Wakatobi. From their survey, it was found that Wakatobi has a great number of marine richness like coral reefs and sea stars. It was also concluded that this area could be developed further as a good tourism object offering underwater panorama as its mainstay.

The local residents in Wakatobi is called Bajau tribe. According to the record of ancient China and European Explorer, this tribe is one of the seamen tribes in Asia which could cross far distance on the ocean with their simple fleet. However, up until now, only Bajau tribe is still exist in Southeast Asia. Watching their unique daily life around the national park is an interesting experience, especially when they hunt for food by diving under the sea without equipments. 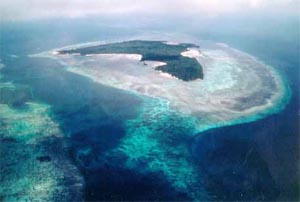 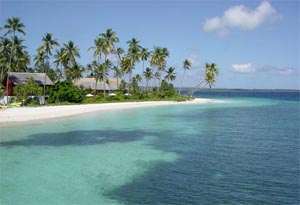 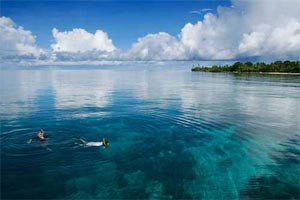 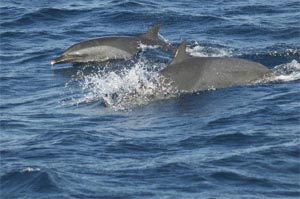 In this national park, there are 25 clusters of coral reef. In these clusters, it could be seen around 112 types from 13 family which are located in 25 spots along 600 km of coastal line. Besides the beauty of the coral reef, this national park also possesses various kind of fish species. There are around 93 species of fish in this national park both from the category of consumable and decoration fish, such as Spotted Argus (Cephalopholus argus), Takhasang (Naso unicornis), Pogo-pogo (Balistoides viridescens), Napoleon (Cheilinus undulatus), Baronang (Siganus guttatus), Amphiprion melanopus, Chaetodon specullum, and many more. Not just that, there are also some species of exotic tropical birds dwells the forests of this national park, like the Brown Booby (Sula leucogaster plotus), Malaysian Plover (Charadrius peronii), and Common Kingfisher (Alcedo atthis). There are also three different kind of preserved turtles, for instance Hawksbill Sea Turtle (Eretmochelys imbricata), Loggerhead Sea Turtle (Caretta caretta), and Olive Ridley Turtle (Lepidochelys olivacea).

In this island, some resorts specially provides you with the diving equipments. Indeed, this island is the gate of Wakatobi National Park. Because of the its fast development, an airport named Matahora Airport is planned to be built in Wangi-Wangi Island. Wangi-Wangi is well known as the distributor of cheap secondhand import goods. In this island, you can also see a fort named Fort Liya Togo. Near from the fort, there is a Talo-Talo Tomb, the tomb of the little king of Buton Sultanate. Talo-Talo in the local language means “a whiz.” There is a unique ritual held every Eid called Posepa.

In Kaledupa Island, there is a coral which is called Kaledupa Coral. This coral is very unique because of its from. People also call this coral as the table coral (refers to its form) which is 2-3 meters in size. Besides its beauty, the people of Kaledupa is also full of history and culture. In Kaledupa, there are various traditional way for getting food from the ocean without destroying the habitat. The activity of the local people, like when they fish using traditional equipments is also attractive to be observe

Tomia Island is a great place for snorkeling and diving. From around the 90’s a luxurious dive resort has been operated here by a Swiss. This resort even builds an airport called Maranggo Airport to bring the tourists directly from Bali. The resort is professionally managed and the tourists who want to stay there should pay a decent value of money. Besides snorkeling and diving, in Tomia you could also visit Fort Patua. Some remains of ancient cannons are still there. There is also Jomba Katepi; a small-holed 100 meter well which was used to dispose the prisoners in the war era.

Binongko is the area of blacksmith society. The people of Binongko has been known as a good producer of parang, a kind of Indonesian traditional sword. In the waters of Binongko, a group of dolphins could also be observed especially when they swim besides your boat. Like the other island, Biningko also rich of underwater beauty which has attract so many tourists.

Hoga Island is one of the favorite diving spots for the professional divers from all around the world. In Hoga, there are around 200 lodges in a form of small wooden stilts house spread along the island. The beach is very fantastic with clean white sand and line of coconut trees on its coast. The water is also crystal clear, make you are able to see the fish swimming around the coral from the top of the dock.

A diving site is located between Hoga Island and Kaledupa Island or called Hoga Channel. This spot is an underwater paradise. Here, you can see a vast area of colorful corals with some beautiful fish swimming through the anemone or coral itself. Such a fantastic scene!

Besides in Hoga Channel, there are also other 20 diving sites in Wakatobi. There are Pinnacle sites near Hoga, Kaledupa Coral in Kaledupa Island, or Mari Mabuk Coral in Tomia; and every sites has its own uniqueness. The most beautiful coral structure is located in the Pinnacle. The corals are just mountainous, like its name “Pinnacle.” Pinnacle site also becomes the natural habitat of a local barracuda species and pygmy a species of tiny sea horse.

To reach Wakatobi National Park you could depart from Kendari to Bau-bau with an express ship for a five hour trip on the sea. From Bau-bau you could continue to Lasalimu by driving for around two hours. After that, you need to take the express ship heading to Wanci. It may take about two and a half hour before arriving in Wanci. Wanci is the front gate of the Wakatobi National Park, so after this, the long trip that you take could be paid off with the beauty and exoticness of Wakatobi.