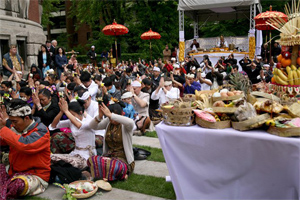 Bali Island was in joy celebrating Galungan Day. Bali seemed to be decorated by various Galungan typical traditional trinkets such as penjor (decorated bamboo), banten (offerings), and many more. Galungan Day is one of the big holidays for Balinese Hindu which is celebrated every 210 days according to pawukon calendar system. This day is always celebrated at Wednesday pancawara Kliwon, wuku Dungulan. Actually, the name “Galungan” is derived from ancient Javanese (Bahasa Jawa Kuno) means “victory” or “fighting”. Galungan also has similar meaning to “Dungulan”, which also means “victory”. In Java, the eleventh wuku is called Wuku Galungan, meanwhile in Bali the eleventh wuku is called Wuku Dungulan. They are different in the spelling, but each still has the same meaning. In this pawukon, Galungan is celebrated; according to its name and meaning.

Galungan Day means to commemorate and celebrate the victory of Dharma (virtue) over Adharma (evil). Galungan gives spiritual power for human to be able to distinguish acts which is belong to adharma or belong to the voice of truth (dharma) inside human’s soul. Galungan has different series of ceremonies which are done before and after Galungan itself. In general, some of those ceremonies are mentioned below.

Redite (Sunday), Paing, Wuku Dungulan, or 3 days before Galungan is the day when Sang Bhuta Galungan comes to the earth to tempt human doing adharma / evil. In this day, we are expected to worship God Siwa so that we are protected from the vices. In this day, the ladies will start to stock up fruits for offerings and make “tapé” (fermented rice or cassava) which is called as “nyekeb” which is also the symbol of strengthen ourselves. 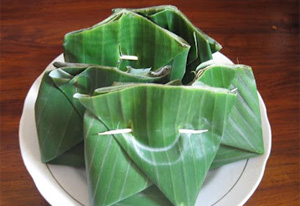 Soma (Monday), Pon, Wuku Dungulan, or 2 days before Galungan is the day for Sang Bhuta Dungulan to come to the earth tempting human to do vices even more. At this time, people will start to make “jaja” (traditional cake) which is also called “nyajaang”. Nyajaang could also mean to sincere. 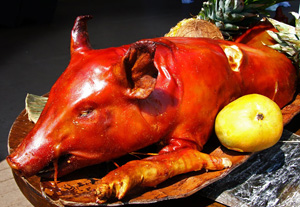 Anggara (Tuesday), Wage, Wuku Dungulan, or 1 day before Galungan is the day when Sang Bhuta Amangkurat strongly tempts human to do vice more than before. We are expected to be able to defeat the power of those three Bhutas (Bhuta Galungan, Bhuta Dungulan, and Bhuta Amangkurat). Symbolically, it is done by slaughtering pig or so called “nampah”. Nampah could also mean “nampa” or an act of sincerely welcome the arrival of Sanghyang Dharma or the God of Virtue. Pig is the symbol of laziness, so killing pig could also mean killing laziness natures.

In the evening, “penjor” is plugged into the ground in front of everybody’s house. Penjor is a kind of decorated bamboo as a symbol of thank to the God for His prosperity. Thus, penjor is decorated with harvests such as fruits, tubers, or cakes and clothes like white and yellow clothes. Besides that, penjor is also a symbol for worshipping Hyang Maha Meru for His blessings in form of Dharma powers. These powers are formed into Catur Weda (Four Vedas) which each of them is symbolized as follows:

Actually, each element of penjor has its own meaning. However, now we can see so many penjors are made using unnatural materials which could be bought instantly. Moreover, some people are competing to decorate their penjor as majestic as it can to be shown off and to be used only for gaining prestige without caring for the process and the meaning behind it. In fact, this kind of trend contradicts the concept of penjor itself. Penjor is also one of the offerings for God so it must be done sincerely without other motives.

Buda (Wednesday), Kliwon, Wuku Dungulan, is the celebration day of human’s victory over the kinds of evil from themselves and from Bhutas or evil creatures. The Gods and Goddesses come to the earth to bless human race. All people will pray in public temple, or house temple to express their gratitude to Hyang Widhi or God.

Manis Galungan Wraspati (Thursday), Umanis, Wuku Dungulan, or 1 day after Galungan is the time for doing Dharma Santi. Dharma Santi is visiting families and relatives to celebrate the holiday and apologize for the mistakes which might have done in the past.

Whatever the history was, the fact is that Galungan is an interesting and attractive moment to be enjoyed by the tourists. The line of decorated penjor along the road, the uniqueness of the ceremonies, and the bustle of Balinese praying in the temples around their village are the typical view that you can only find in the Island of God.