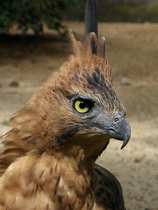 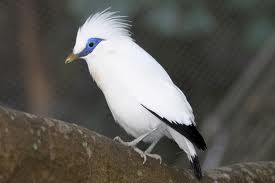 The population of Jalak Bali / Bali Starling ( Leucopsar rothschildi ) is seriously endangered. Besides Javan Hawk-eagle, Bali Starling is one of the most endangered birds in the world. This bird is also new for scientific subject and it was first explained by Walter Rothschild in 1912. The adults Bali Starling has white wings and tail with black stripes, yellow bill, and blue bare skin around the eyes. This Balinese endemic bird was found along the west coast of island in the monsoon forests. 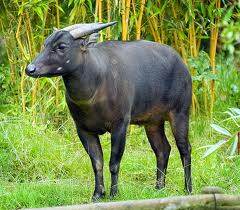 Mountain Anoa is another Indonesian endangered animal. This animal is a subfamily of the wild bull. However, its tiny size makes this animal looks more like a deer. This Indonesian endemic animal could only be found in Sulawesi and island of Buton.

Not many information are available for this species’ habitat preference because its mousy habit. This animal lives in the area of 500 and 2000 m above sea level, but some reports have different explanation for the other habitats. Some say that mountain anoa live in the dense forest with vegetational diverse, meanwhile it was also reported that they like a relatively open forest with water sources.

Cuscus Bear or Kuse (Ailurops ursinus) is one of the two kind of cuscus endemic species in Sulawesi. This animal belongs to marsupilia or animal with pouch in their body. The female cuscuses carry their baby in this pouch in front of their stomach. The length of their body and head is 56 cm, their tail is 54 cm and their weight can reach 8 kg. Kuse has prehensile tail which can hold things and it is usually used for helping their grip on the tree or branches. In North Sulawesi, Kuse face serious danger of extinction because of its small population. Between 1980 and 1995 in Tangkoko, the population of Kuse had been undergone significant decrements until 50%. A survey held in 1999 showed that this animal could only be spotted seven times in the length of 491 km transect path. That fact shows that the population density of this animal was very low. 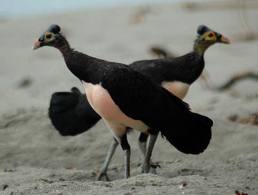 Maleo is in the category of endangered animal. Its habitat is in Sulawesi and Buton Island. They live in the lowland and coast. This “flashy” bird has some characteristics like thin body, dark crest, yellowish head, black thight, and white stomach with pink area on dorsal. This rare bird usually stays silent, but if they are found around their nest they could be very noisy. 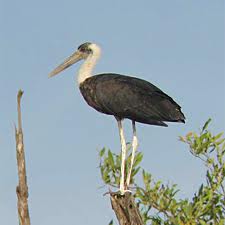 This bird is belong to ciconiidae family. Bangau hitam or bangau tongtong were originated from Asia, especially India, Indochina, and Indonesia except Papua and Maluku. They spread widely to Africa, Myanmar, Hong Kong, and Philippine. This firm footed bird like to live around swamp, river, mangrove, ricefield, and open forest, sometimes even in dry or muddy land. This stork can be easily identified by its black body except in the neck and lower abdomen. Its length could reach 91 centimeter. In the night, bangau tongtong are perched on the branch. This species is the only one among the stork that does not widen their feet and wings while flying. This animal is not really have much variation of life. Bangau tongtong can live alone, in pair, or in group depending on the situation. Nowadays, this bird which in Java is known with name “sandanglawe” is getting hard to meet. They are categorized as preserved animal and protected by laws because of its endangered status. 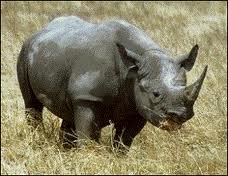 The status of this animal is endangered; WWF decided to protect this animal from extinction. Badak Jawa / Java Rhinoceros is one of the rarest giant mammals in the world. The name “rhinoceros” is derived from the Greek for “nose horn,” which indicates the horn that rhinoceroses have on their snout. This horn is made from keratin fiber. The length of their body could reach 2-4 m, with height about 170 cm. The weight of this big animal is amazing, reaching 900 – 2,300 kg or about 2 ton. Rhinoceros is characterized by grey and “armored like” body. Java rhinoceros can be found in Ujung Kulon National Park, Banten.

Beautiful skin pattern! This shark’s skin has a lot of similarity with the skin of a leopard; hexagonal brown spots with pale center spread along the upper body. Small dark spots cover their snout, meanwhile the bigger spots exactly behind the fins. The habitat of this animal is the coral reef, sand, and seaweed field across Papua. 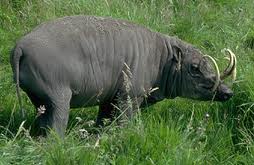 Babirusa Sulawesi is in the list of extremely endangered animal. This animal is known living in the north peninsula and northeast area of Sulawesi, and a few of them could also be found in the center, east, and southeast of Sulawesi. This animal characteristic is the large tusk that is originated from its canine. The weight of this animal could reach 600 kg. This animal is usually seen in tropical rainforest area. 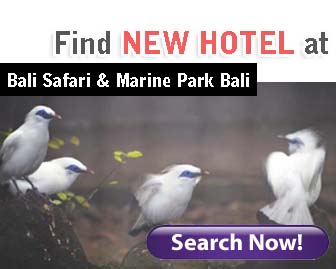 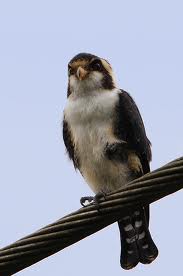 Well known as the smallest carnivore bird in the world, Black-thighed falconet could be found in Southeast Asia region with approximate size for about 15 cm with 35 gram weight.