Goa Gajah or literally means “Elephant Cave” is a historical and spiritual tourism object located in Bedulu Village, Disctrict of Blahbatu, in Gianyar Regency, about 27 km from Denpasar. The words “Goa Gajah” was derived from word “Lwa Gajah”, a word that appeared in Negarakertagama manuscript which was written by Mpu Prapanca in 1365 B.C.

Goa gajah was built in the eleventh century B.C., when King Sri Astasura Ratna Bumi Banten came to power. This cave was used as meditation place, which could be seen by the existence of some niches inside it. Besides that, there are also some holy pools with seven statues of angels holding holy waters around the cave. Unfortunately, now one of these statues is moved to the safer location because of damage taken after an earthquake a few years ago. These statues are actually the symbol of seven holy rivers in India, the place of birth for Hinduism and Buddhism. 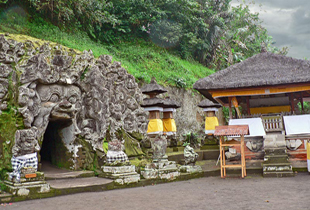 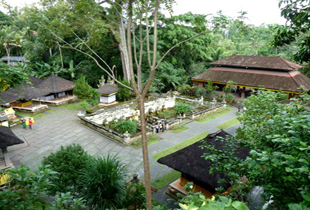 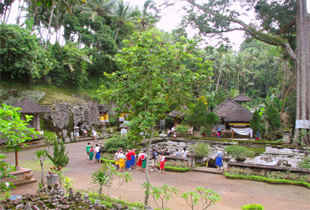 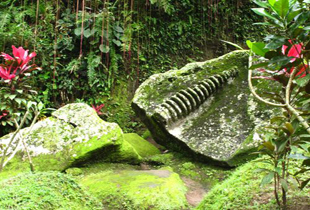 This place has some priceless archaeological heritages, thus this holy cave has been being favorite place to visit by the foreign tourists and local tourists as well. This holy site is divided into three parts. There are a complex of ancient Hindu sacred buildings which were built around the tenth century B.C. There are also Hindu sacred buildings in the form of small temples or “pelinggih” which were built after the previous century. Whereas, the third part is the Buddhist heritage buildings. The archaeologists estimate the construction of these Buddhist’s buildings was done around the eight century B.C., about the same time with the construction of Borobudur Temple in Central Java.

In the eastern niche of the cave there are three big Lingga lined up on top of one base, meanwhile in the western side there is an Ganesha statue in the cave shaped like T. In short, at the central end or “keluwan” of the cave there are three Lingga as the symbol of Siva, or Sang Hyang Tri Purusa. Whereas, in the front or “teben” of the cave there is a Ganesha statue who is the son of Siwa in Hindu myth. Ganesha is a God with elephant head and human body; the son of Siwa and Parwati. In accordance to the existence of this Ganesha statue, Miguel Covarrubias argued that this cave was given name “Goa Gajah” or “Elephant Cave.” Ganesha in Hinduism belief is a “Wighna-ghna” and “Winayaka” God. “Wighna” means obstacle or defiance. By worshipping God in the form of Ganesha, people hope that they are given the spiritual guidance to have self endurance in facing every obstacle and defiance of the life. Besides that, Ganesha is worshipped as “Winayaka” for getting God’s guidance in growing discreet life. These abilities to face obstacle and to develop discreetness are the beginning of achieving a peaceful and prosperous life in this world.

In front of the cave, there is an ancient shower statue in a holy pool which until 1954 had been covered by dirt. At 1954 this place was excavated and six “Widyadhari” or female angels statues were found; three on the northern part and three on the southern part. These angels statues are placed on the “Padma” or lotus base. Lotus in Hinduism is a symbol of the universe. In the middle of this pool, there is one statue of “Widyadhara” or male angel. The other six Wiyadhari statues shed water into the pool as the symbol of fertility.

Beside the Goa Gajah temple , there are Hindu sacred buildings inherited from the era of Hindu Siwa Pasupata, and then after that era, or in the era of Hindu Siwa Siddhanta, “Pura” or Hindu temples were functioned as the sacred building. Hence, in the southeast part of the Goa Gajah, there are some temples, like: Limas Catu and Limas Mujung Temple for Agung and Batur Mountain God. There are also Gedong Temple for the ancestors of the Bedahulu Kings and Ratu Taman Temple for worshipping Visnu as the God of water.

In addition, there are also some ancient Buddhist inheritances, which even more ancient than those previous Hindu inheritances in Goa Gajah. Outside of the cave, in the western side, there is a Buddhist statue “Hariti Goddess” or in Bali known as “Men Brayut” statue. This goddess statue holds a lot of babies. In the mythology of Buddha, Hariti was a cannibal especially for babies meat. However, after she learnt Buddhism, she finally became a religious and child loving person. In the south of Goa Gajah, through the trench, a Buddha statue was found in Dhyani Buddha Amitaba position. In the pantheon of Buddha Mahayana, this position means that Buddha as the guardian of the western side of the universe. That is all the explanation of Goa Gajah features which are very interesting and worth to be visited.