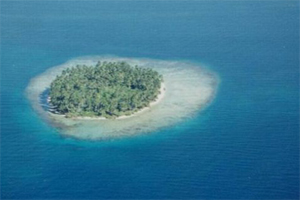 Biawak means monitor lizard (Varanus salvator). This animal is quite similar with Komodo. Komodo Island may have been familiar in your ear because of its global reputation. However, have you ever heard Biawak (monitor lizard) Island? This one must be very unfamiliar for you.

Monitor lizard and komodo is quite similar, but komodo is indeed larger and more verocious. Not like komodo which only live in Komodo Island, monitor lizard can almost be found in every region of Southeast Asia. In Biawak Island, there are a lot number of these lizards. Although this animal cannot become the main attraction of this island, Biawak Island is still an exotic and peaceful island which is best suited as an excursion island. 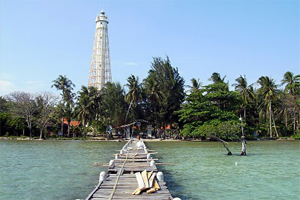 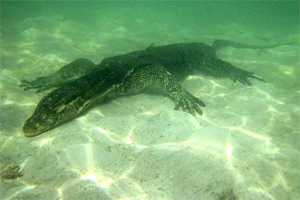 Although not really popular, Biawak Island is an interesting tourism object to be visited. With 120 hectare area, this island is also rich with green mangrove trees. If it is seen from high, the greens look beautiful surrounding the beach. This island can be reached by 3 – 4 hour trip using motor boat from Karangsong dock, Indramayu. This island is known for its underwater beauty which is lived by colorful fish and amazing coral reefs. The attractive side of this island is surely unique, because of its natural and healthy coral reefs which are very enjoyable to watch. Here are some attractions that you can find in this island.

Actually, this small island is dangerous for every ship crossing this sea. Therefore, a 65 meter lighthouse was built in this island to guide the ship and prevent accident. The constructor was ZM Willem in 1872, when Indonesia was still colonized by Dutch. The lighthouse still function until now, and you can see the amazing view of ocean and dock from top of it.

Monitor lizard which is an endemic animal of this island is not afraid of human. As an endemic animal, this lizard is still interesting to be watched. If you want to see them, you can put fish or meat around this island and then they will come quickly. Although they are harmless, we still need to be aware because their tail can hurt you.

Gosong Island is a small land located on top of the sea surface. This island is about 1 hour trip from Biawak Island using boat. Gosong Island is actually good for swimming and snorkeling. But, unfortunately, Gosong Island’s environment has been broken by for the construction of a refinery project.

Biawak Island also has a dense mangrove on its shore. Besides mangrove, a lot of pine trees can be also founded in the middle of the island. This forest is the place for various birds, so it will be interesting if you can observe them directly.

The dock in this island is quite long and stands on a beautiful white sandy beach. Some parts of it are already built by concrete, and the other parts still use wood. Therefore, we must be a little bit careful when crossing this dock. Apart from that, the atmosphere and view of this island is very amazing.

For reaching this island, you must cross the ocean from Karangsong Dock, Indramayu. So firstly, you must get into Indramayu. To reach Indramayu you can use bus or train from Jakarta. After arriving in Indramayu, you can directly head to Karasong Dock to rent a motor boat. The trip to Biawak Island usually needs around 3-4 hours.