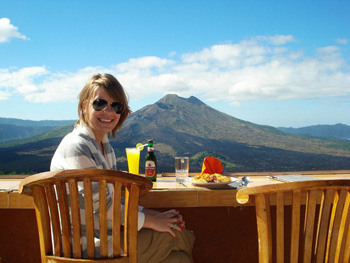 Bali has been reputed as one of the best holiday destinations in the world. The beauty of its natural panorama is not only the main factor that people flock to Bali. The uniqueness of its culture, the climate, and friendliness of Balinese have been contributed to the booming visits to the island of Gods.

From the data taken by Badan Pusat Statistik Provinsi Bali (Statistic Department of Bali), at least there are ten countries which have become the loyal customers / regulars of Balinese tourism. According to the chief of this department, I Gede Suarsa, Australia stays on the top position in supplying foreign tourists into Bali, followed by other big countries like Chinese and Japan.

During 2011, the amount of Australians who spent their holiday in Bali was reaching 788,664 people. Meanwhile, the newest data analyzed from the period of January – August 2012, it was noted that Australia supplied 627,793 tourists or 33.03 percent from the total of foreign tourists who visited Bali at that time. According to I Gede Suarsa, “That amount shows that there is increasing number of the Australian tourists visiting Bali if it is compared to the same period (January – August) in 2011. Significantly, the amount of the increase is 25.23 percent from the last period which recorded 501,326 tourists.” It was concluded that the increase is not only caused by the better condition of Australian economy, but also by the conducive condition of Bali, the proximity between Bali and Australia, and also the easiness of getting on air transportation.

Australia ranks first from the list of top 10 countries supplying the most tourists to Bali. Most of them came through Ngurah Rai Airport using flight service directly from their country. It was also found that 12,446 tourists came through cruise ships.

I Gede Suarsa added that Australians keep coming to Bali because they treat Bali as their second home. It means that Australians feel comfortable staying in Bali, whether it is because the factor from the island itself or the factor that these Australians who want an escape from the routines in their country. This condition makes this commonwealth country contributes more than a third of the total foreign tourists visit to Bali.

Meanwhile, China stays on the second position as the most tourists contributor, after Australia. They recorded an increase reaching 39.12 percent, followed by Japan 9.24 percent, Malaysia 20.76 percent, South Korea 26.56 percent, and Singapore 23.21 percent. The number of French tourists also increases to 12.23 percent, while British increases to 42.07 percent and American 31.10. The country that has decreasing visit is Taiwan 1.02 percent from 89,528 tourists to 88,612 tourists.

The Main Reasons of High Visit Number from Australian Tourists

There are some reasons that makes Bali still become the best holiday island for the Australians. In general, this fact is influenced by geographical position of Bali and Australia, also the uniqueness that Bali offers not only for Australians but also other countries. This two general factors play important role in keeping Australians coming to Bali. Below, it is explained some reasons / factors that may contribute to this fact.

The proximity between Bali and Australia could be said as the main reason for the Australian tourists preferring to visit Bali rather than other holiday destinations. It will only need around 3-7 hour flying depending on the departure location. With that short trip, a lot of time will be saved especially for them who does not have a long holiday.

The warm climate of the dry season in Bali is the favorite of every tourist including Australians. Even though there is rainy season during December until March, the temperature of Bali is still warm ranging from 20 until 33 Celsius degree. It will be still fine for the tourists as they come to Bali to enjoy this kind of temperature that they did not feel in their country. Moreover, the rain usually comes at the night, so in the morning till afternoon, tourists could go anywhere they like.

Bali with its unique and ancient civilization is an attractive destination for every tourists. Here, a lot of historical and religious buildings or temple could be easily found since it has been integrating in the Balinese life. The old temples which were built thousand year ago are still maintained well. From here, tourists could spend their holiday and learn history at the same time.

World has acknowledged the politeness and friendliness of Balinese towards everyone, which have been inherited from their ancestors over generations. The care that the Balinese shows even for the strangers also becomes a thing that the Australians found very comforting. It is very different from the culture of the westerns or Australians where people hardly care each other. Besides that, the traditional culture that Bali possessed gives a unique experience of holiday for them.