Universal Studios Singapore (USS) is the only Universal Studio in the Southeast Asia region which is located in Sentosa Island. This place is one of the best family outing places in Singapore. This theme park offers various kind of unique rides and attractions with total different 7 themed zones, such as Hollywood, New York, Ancient Egypt, Far Far Away, Sci-Fi City, and Madagascar. 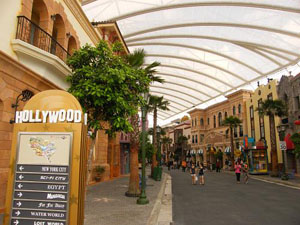 Immediately after entering the park, you will see the Hollywood. Besides the unique setting this zone also offers you opportunity to meet some characters, such as Betty Boop, Beetle Juice, until the characters of Madagascar. Thus, this area/zone is favorite for taking pictures. This is also the place for Pantages Hollywood Theater, a place where you could watch a musical show of Universal monsters (Monster Rock), and even the Ironman.

This area also has a lot of merchandise shops like Universal Studios Store which sells themed collectible, toys and apparels; The Dark Room which sells things related to the visitors photo; Star Characters; Silver Screen Collectibles; Super Star Candies; The Brown Derby which sells accessories and hats for the kids; and That’s a Warp. For the restaurants there are Celebrity Cafe and Bakery, Hollywood China Bistro, and Mel’s Drive In (a classic 50′s drive-in restaurant which serves All-American favorites). 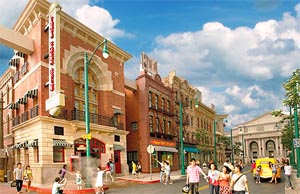 New York is very close to the Hollywood. This area is located just in the right side of Hollywood. This area is very glamour with more colorful settings. Together with the Hollywood, this area is the visitors’ favorite place for taking photographs. The main attraction is the special effect show called Steven Spielberg’s Lights, Camera, Action. When you exit this area you will see the Hershey’s store. It sells various kinds of chocolate with different flavors. 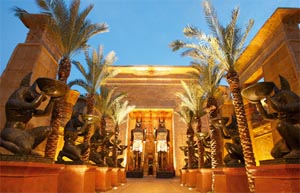 Ancient Egypt is very exotic yet thrilling area. In the Revenge of the Mummy, feel the thrill as you face some warrior mummies in an indoor roller coaster ride. Meanwhile, in the Treasure Hunters, you will venture the area of manmade Egyptian excavation site by driving a desert jeep. In the same area, a souvenir shop is available which is uniquely named as Carter’s Curiosities. Besides that a restaurant called the Oasis Spice Café is worthy to be visited. 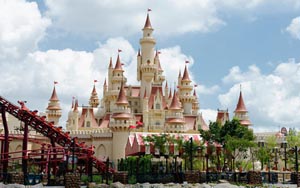 Far Far Away is probably the most popular zone amongst the visitors. This zone offers a beautiful and unique setting which really brings you into the world of fairytale. Besides that, some attractions and activities in this zone are interesting and spectacular. For example, there are Shrek 4-D adventure offers a unique experience seeing, hearing, and also feeling the adventure of Shrek’s characters right from your seat, Donkey Live which allow you to sing along with donkey in an interactive live show, an exhilarating roller coaster called Enchanted Airways, and a kiddies’ unique Ferris wheel called Magic Potion Spin.

There are two restaurants in the Far Far Away, Goldilocks and Friar’s which both serve sandwiches, fish and chips, and many more. Besides that, there is also Fairy Godmother’s Juice Bar, where you can mix your own colorful elixirs (juice). 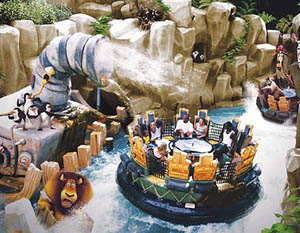 The Lost World will bring you into the prehistoric jungle in a modern area. Here, you can feel the adventure like you saw in the movie. The attractions are Jurassic Park Rapids Adventure, Canopy Flyer which is a funny inverted roller coaster, Dino Soarin a kind of kiddies ride on a back of Pteranodon, Amber Rock Climb where you get to scale the walls to explore artificial precious stones and fossilized insects, and a remarkable live water show based on the movie of Waterworld.

The available restaurant in this area is Discovery Foodcourt with its unique Jurassic setting. Besides that, there is also the Fossil Fuels stall nearby as an alternative. 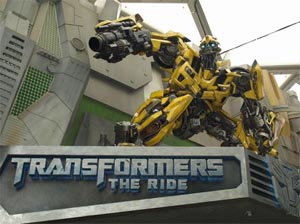 In this impressive zone you will experience the ultimate intergalactic battle of Good versus Evil and visit a vibrant metropolis with all the ultimate modern conveniences. Some rides and attractions with future style are available, like the Accelerator a whirling twirling attraction;

Battlestar Galactica: Human vs Cylon a spectacular and intertwined roller coasters which the riders on both coasters will experience unbelievable thrills as they race towards each other and nearly collide; and Transformers The Ride a hyper-realistic 3D thrill ride, right in the middle of the incredible world of Transformers.

The unique and futuristic restaurant StarBot Café is ready to serve you with variety of Asian cuisines. There are two souvenir shops located in this area, they are Galactica PX and TRANSFORMERS Supply Vault. 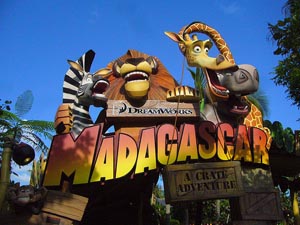 Madagascar’s characters are always enjoyable to watch. You can watch them dance like in the Move it Dance Show. After the show you could see them in the “meet and greet” and take some photographs with the characters. Besides that, you can also enjoy a river boat ride with these characters through the Crate Adventure. In the same area, there is also King Julien’s Beach Party-Go-Round, a unique carousel for kids. You can bought some souvenirs of the Madagascar characters from the Penguins Mercantile. The restaurants are Marty’s Casa Del Wild which serves Southeast Asian dishes and Gloria’s Snack Shack which offers Japanese rice bowls and seafoods.