Australia has been known as one of the most developed countries in the world. It could be seen from the advance of its development, economy, education, and also military sector. This country is also the most unique country in the world, because Australia is the only country which at the same time is also a continent. This small continent has a beautiful nature with enormous richness of animals, floras, and landscapes. Australia is also included as the nominator of the New 7 Wonders of Nature from 259 nominators offered by 222 countries.

Although, did not selected as one of the New 7 Wonders of Nature, Australia is still exotic and attractive. Many tourists still choose Australia as one of its favorite destination. What is actually special from the nature of Australia? Well, maybe you could draw your own conclusion after reading some of Australia’s favorite natural attractions below. 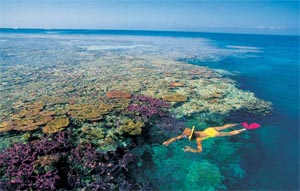 Great Barrier Reef is a the largest coral reef system in Australia and even in the world. located near the Queensland’s beach, this natural wonder is formed by over 2,900 individual reefs and 900 islands stretching for about 3,000 kilometers over an area of approximately 344,400 square kilometers; larger than the Chinese Great Wall. Amazingly, this reef system is the only living things which is visible from the space, so you can imagine how vast the area of it. It was said that this reef system has been existed from the prehistoric era, or about 25 million years ago. 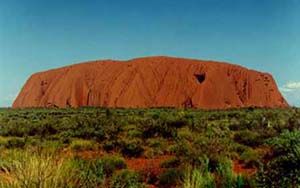 Uluru which is also known as Ayers Rock is a large sandstone rock formation located 450 kilometers southwest from Alice Springs in Kata-Tjuta Uluru National Park, central Australia. This rock is made from sandstone and one of the largest monoliths in the world. Uluru rises 348 meters above the desert floor and has a circumference of 9.4 kilometers. Such a big stone!

Because of its greatness, many people try to climb this big rock. However, Uluru is actually a sacred place for the people of Anangu; the indigenous of this area. These people do not allow tourists to climb this sacred site anymore. Apart from that, Uluru is still one of the attractive places to visit in Australia. Moreover, it is getting famous because of the color at this sites could become more vibrant and even changing at some particular time. 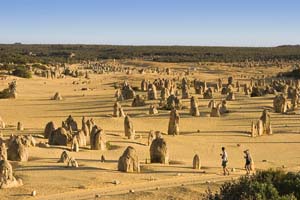 It was said that this places has been existed from 30 thousand years ago when this area was still an ocean. Thousands of stone pillar spread around the area of the desert creating an amazing and unique landscape. The height of these stones varies from a few centimeters until 3.5 meters. Some of them has a jagged top, but some also has a round top which look like a tombstone. These rocks are formed from hardened shells existed from the prehistoric era when this area was still underwater.

The Pinnacles is located in Nambung National park, and is a natural habitat for the grey kangaroos and some species of reptiles. 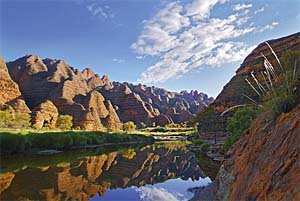 Bungle Bungles is a national park with the collection of unique sandstones massif. It was estimated that the area was formed around 350 million years ago. The highest top could reach 578 meters. A scenic flight is the best way to gain a perspective of its massive size. Many people prefer seeing the panorama of Bungle Bungles from the air because the panorama could be very astonishing. However, visiting this area by road is also a worthy experience, especially for the people who like adventure. 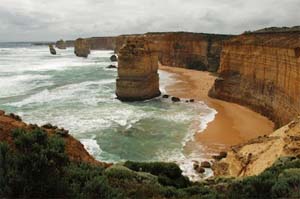 This place is located off the shore of the Port Campbell National Park, by the Great Ocean Road in Victoria, Australia. Twelve Apostles is a place for a unique collection of limestone stack located in the beach. However, its existence become dangerous because of a severe erosion happens in this beach. Actually, the time when it was given the name Twelve Apostles (12 limestone), there were only 9 limestone left. Unfortunately, now only eight are still exist. However, this place is still an attractive place to be visited considering the uniqueness that you may not find in the other places in the world. 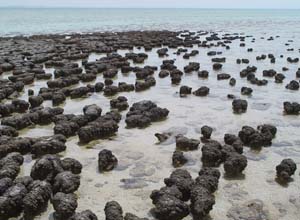 Shark Bay is located approximately 800 kilometers north from Perth, Western Australia. Even though there is a population of shark (lemon shark) in this place, the chances of being attacked by a shark in the bay are very low. This place is a safe place for enjoying an amazing natural panorama of Western Australia. Shark bay has a white sand spread along 1.500 kilometers. Besides that, there are also limestone and cliffs which are very high. Besides population of shark, in this bay there are also species of dugong (sea cows), bottlenose dolphins, stingray, and many more. 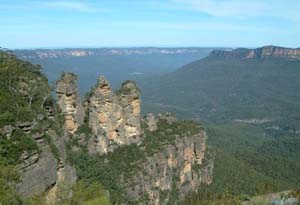 Blue Mountains is located in the West of Sydney. You will be amazed by the beauty of this World Heritage Area. This mountain is shrouded by bluish fog. With approximately one million hectare area, this area is the most attractive mountain for the tourists, and adventurers. Blue Mountains area consists of high forests, sandstone cliffs, waterfall, and bushes. You can venture this area by mountain cycling, walking around with an Aborigine guide, or even get on a train in Greater Blue Mountains Drive.