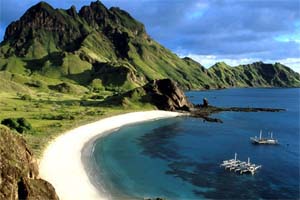 Travelling to a dragon’s lair maybe is a common fairytale story that you could find in children’s books. However, this article is not going to tell any kids’ story about a giant winged lizard, but the real dragon of Indonesia, the “komodo dragons”, which you can find in Komodo Island.

Komodo Island is national park located in Nusa Tenggara, Indonesia and located between two islands, Sumbawa and Flores. This island is known as the natural habitat or the “lair” of komodo dragons, and in this island these komodo breed and live very well. Komodo National Park consists of three main islands: Komodo Island, Rica Island, and Padar Island.

The name Komodo Island was given in 1910 by the Dutch colony in Indonesia. It was started when the Dutch army reported to their lieutenant, Steyn Van Hens Broek, that they had seen a giant animal like a dragon around the island. Van Hens Broek then tried to see it himself and managed to kill one. After that, he brought the sample of the dragon to Bogor Museum and Botanical Garden to be studied.

Komodo or Varanus komodoensis is the biggest lizard species in the world which lives in Komodo, Rinca, Flores, Gili Motang, dan Gili Dasami islands. By the local residents, this lizard is also called “ora”. Included in the family of Varanidae, and clan Toxicofera, komodo is the biggest lizard in the world with 2-3 m length and 165 kg weight. This giant size is related to the island’s gigantism symptom which makes some particular animals lives in a small island bigger than its normal size. This symptom is caused by the absence of mammal carnivore in the island where komodo live, and also caused by their small metabolic rate. Thus, because of its giant body, this lizard sits on the top of the food chain in this island, where they fully dominate the ecosystem.

Until now, komodo has been the pride and the revenue source for the local people, because of the attracting power of this lizard to the tourists. In this island, the tourists could directly observe the life of komodo, like the breeding season between May until August; roaming and sunbathing around the forests and under trees every morning; or hunting for their favorite foods like deer, goat, or boar. To protect komodo from extinction, in 1980 the government established Komodo Island as a national park. Six years after that, this national park was accepted as one of the world heritage site by UNESCO. Komodo National Park covers the area of 1.817 km². 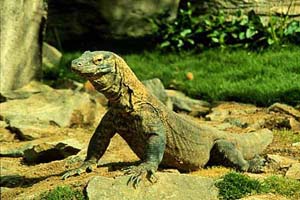 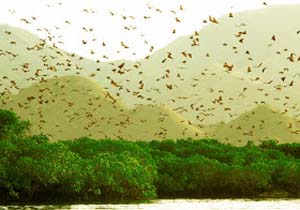 Now, the habitat of komodo in the wildlife is getting smaller. Therefore, IUCN stated that this species is in category of endangered animal.

Other Attractions around Komodo Island

Besides travelling to see komodo, there are also some interesting places that you could visit during your tour in Komodo Island, for example:

1. Loh Liang – a tourism concession area where you could observe directly the life of komodo, deer, boar, various kind of birds, or even playing canoe.

2. Merah Beach – a shallow beach with beautiful panorama and amazing coral reefs. Here, you can go snorkeling or sunbathing under the warm sun of Nusa Tenggara.

3. Loh Sebita – Loh Sebita is a mangrove area, which are visited by a lot of tourists. This is a good place for trekking and observing birds.

4. Loh Buaya – a tourism concession area where the tourists are invited to see endemic animals like komodo, deer, buffalo, birds, long-tail monkey, wild horse, and so on.

5. Kalong Island – an island with a large number of “kalong” or bats. Many tourists come to this place to see these bats activities, and it is best to observe the bats in the afternoon where they are about to go out to hunt for food.

6. Golo Kode – from the top of the hill which is known as Golo Kode, the tourists could see fantastic panorama and natural landscape as a result of the representativeness of various ecosystem type which could be observed from here.

7. Molo Strait – a strait having strong river current which flows in the tide.

There are 36 diving spots in the area of Komodo National Park which are often visited by the foreign tourists for diving and snorkeling, like Tatawa Island, Merah Beach, Gililawa Laut, Loh Dasami, Pillar Steen, Batu Bolong dan Taka Makasar.

To visit this place, there are some kind of transportations you could choose. From the land, you could reach this place from Bali to Mataram Bima and then Sape. After that, it could be continued by getting on a ferry heading into Labuan Bajo. From here, tourists could visit Komodo National Park using speedboat. Another alternative is using airplane from Denpasar, Bali to Labuan Bajo everyday by local airlines, like Indonesian Air Transport (IAT), Merpati, or Trigana Air.