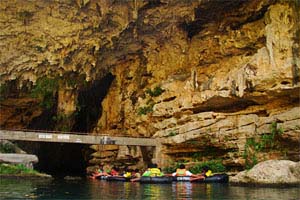 Indonesia does not only have amazing mountains, rice fields, or marine natural tourism objects. Far away in the bowels of the earth, there is also natural beauty in another form, like the beauty of Pindul Cave located in the area of Kidul Mountain, Yogyakarta. In the Gunungkidul regency, whose area was dominated by karst / limestone hills, there are various tourists attraction, like rock climbing in Siung Beach, caving in Seropan, or exploring Nglanggeran Ancient Mountain. Now, there is another tourist attraction which is developed by the Department of Tourism and the local residents, called “cave tubing” in Pindul Cave.

Cave tubing is a caving activity using raft or inner tube, meanwhile Pindul Cave is a series of seven caves with underground river in the region of Bejiharjo. The calm flow of the river enables us to explore this river with buoys or raft. Cave tubing actually combines two exhilarating activities, body rafting and caving and also a bit similar with rafting. the equipments which are needed are also similar with rafting, like lifejacket, lifebuoy, head lamp, and other safety equipments. Although the depth of this river reaching 5 – 7 meters, the water flows calmly so it is safe for children, teenagers, beginners, or even pregnant women.

Pindul Cave has approximately 350 m length, 5 m width, 5-12 m depth, and the height between water surface to the cave roof is about 4 m. This cave has 3 zones; bright, dim, and dark zone with travelling time about 45 minutes. 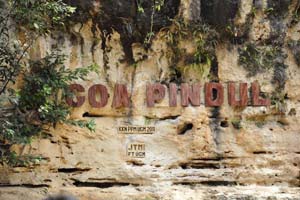 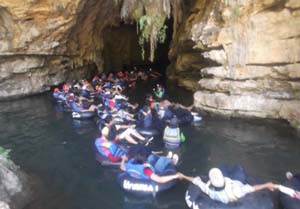 The best time to visit Pindul Cave is around 8 until 10 in the morning. Usually in this range of time, the water of the river is not too cold, and if it is sunny you will be able to enjoy the sunlight bias entering the cave from its wall and roof. In the center of the cave there is a quite spacious room/area with a hole on the top of the cave which is called “sumur terbalik” or “reversed well” by the local residents. The sun light which go through this hole creates a beautiful scene and amazing ambience. While exploring the cave you will also see big ancient stalactite and stalagmite which are already merged into one which looks like a big pillar in the size of five arm spans of an adult.

The Fourth Biggest Stalactite in the World

The biggest stalactite in Goa Pindul is also the fourth biggest stalactite in the world. Like explained before, this merged stalactite and stalagmite needs 4 until 5 people to encircle it. Moreover, the gap of this stalactite could be passed by an adult. There is also the “nipple stalactite” as called by the local residents, reputedly could make women more beautiful and ageless by its water droplets. For the children, it would be fun to swim in the bright zone, or jump from the rocks into the water and see some fish lives around the river. The charm of this cave is also completed by the natural abstract ornaments along the cave wall. There are also some water curtains made from the water droplets from the cave wall. The crowd of the bats hanging on top of the cave would accompany you reaching the end of the cave.

To reach Pindul Cave, you could use private vehicle or public transportation. You can depart from Yogyakarta heading into the capital of Gunungkidul Regency, Wonosari. After arriving in circular route, turn left and follow the route to Karangmojo. In the Argopolitan crossroad, turn left once again into the village route and you will arrive in Bejiharjo Village. Gelaran Village, the location of Pindul Cave is in the area of Bejiharjo.

For the tourists who bring their own equipments and do not need assistance from guide could directly enter Pindul Cave without paying a penny. However, for those who do not know how to do cave tubing and do not bring equipments could contact the administrator who could provide you with equipments and tour guide. For standard package, you will need to pay around Rp 25.000 – Rp 30.000. With that price, the tourists will get facilities like, tour guide, cave tubing equipments, snacks, and lunch.

Accomodation and Other Facilities

There are a lot of facilities available for the tourists to ensure their comfort in visiting this place. Some of those facilities like, cave tubing equipments (inner tube, lifejacket, and headlamp), tour guide, homestay in the form of typical local residents’ house with bamboo wall, fishing pond, and small restaurants.