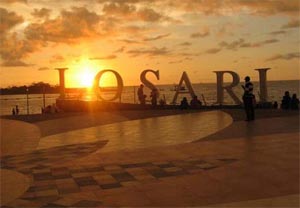 In Indonesia, there is only one beach where you can see both sunrise and sunset. That beach is Losari Beach located in Makassar. Besides that, Losari Beach is clean and well organized. The ideal time of visiting this beach is in the afternoon between 3 until 9 pm. Many people come here to enjoy the beach atmosphere, jog along the clean pedestrian, or eat in the restaurants. This beach is getting crowded when the sun rise in the morning or sun set in the afternoon. If you love jogging this place is the ideal place. Fresh air, gentle breeze, red-gold sun, and romantic atmosphere; this beach is a favorite place to spend your holiday in Makassar. 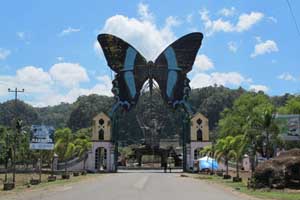 The official name of this national park is Bantimurung Bulusaraung National Park South Sulawesi. This tourism object is located in Maros Town which could be reach in 1 hour drive. Indeed, this place is a favorite tourist destination in South Sulawesi. In 1856-1857 a famous naturalist from England, Alfred Russel Wallace spent his joyful days catching and researching various kinds of butterflies, birds, and rare insects. Among those butterflies, there were the species of Papillo Androcles, one of the rarest and the biggest butterfly in the word which has long tail like swallows. The natural life of these animals has been tourist attraction for years. 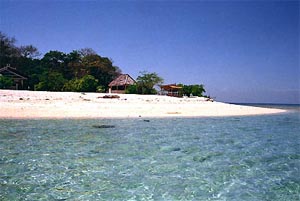 Samalona Island is an island in South Sulawesi with 2.34 hectare size. This island is one of the marine attraction which has a lot of visitors from both local area and foreign country. This island’s area is an ideal place for diving, because around the island there are some reefs which are inhabited by various species of tropical fish and other sea biota. Samalona Island is abour 6.8 km from Makassar City which could be reached in 20-30 minutes using speed boat. In this location, there are also some simple lodges in form of “rumah panggung,” Sulawesi’s traditional house which could accommodate around 20 persons. Besides that, there are also some local restaurants serving various kind of fresh seafood. 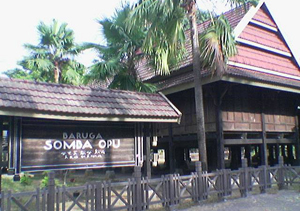 Somba Opu Fortress was built in 1525 by Sultan Gowa IX. This fortress was the center of spices trading and port, which was crowded by merchants from Asia until Europe. In 1669, this fortress was taken by VOC, and then destroyed until it was submerged by tidal wave. Around 1980, this fortress was found back by some scientists and in 1990 it was reconstructed until this fortress stood firm once again. Now, Somba Opu Fortress has become a historical tourism object in Makassar. Inside this fortress, there are some traditional buildings of South Sulawesi representing Bugis, Makassar, Mandar, and Toraja ethnics. Besides that, there is also a 9 meter cannon with 9.500 kg weight displayed here, and a museum containing historical remains of Gowa Sultanate. 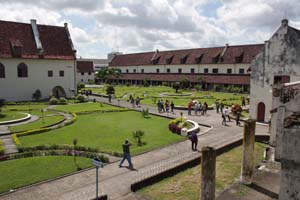 Fort Rotterdam was built in 1545 by King Gowa X with name “Benteng Ujung Pandang”. Inside this fortress there is a “rumah panggung” or stilts house of Gowa, where the King and his family lives. The time when the Dutch ruled Banda and Maluku, they decided to conquer Gowa Kingdom so the VOC’s trading fleets could easily enter Sulawesi. In their effort to take Gowa, Dutch hired some mercenaries from Maluku. During more than a year, this fortress was battered and then finally the Dutch successfully destroyed the King’s fortress. They forced Sultan Hasanuddin to sign Bongaya agreement in 1667, which one of its clause was to give Benteng Ujung Pandang to the Dutch.

Now, in this big fortress there is still a church left by the Dutch and La Galigo Museum which saves more than 4 thousand collections of numismatic, foreign ceramics, history books, scripts, and ethnography. The ethnography collection consists of different kind of technology, art, tools, and other things which were used by Bugis, Makassar, Mandar, and Toraja ethnics. Nowadays, besides functioned as a tourist attraction, this fortress is also used as the cultural center of South Sulawesi. 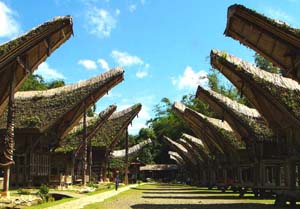 Tana Toraja is a tourism object which is widely known for its unique culture. This regency is located approximately 320 km north from Makassar and very famous with its wooden traditional house. That traditional house is called TONGKONAN. Its roof is made from sliced bamboo which are stacked as a roof. However, some of tongkonan now use zinc roof, so it will be more durable. Tongkonan also has strata based on the degree of its owner nobility, like gold, bronze, steel, and brass strata.

Besides that, another thing that is famous from Tana Toraja is “londa”. Londa is a steep rock hill in the cemetery of Tana Toraja. Londa is about 5 km to the south from Rantepau. One of them is located in the high place on the hill with many caves where the coffins of the local people are arranged based on family line. In the other side of the hill, these coffins are opened facing the vast scene from top of the hill.