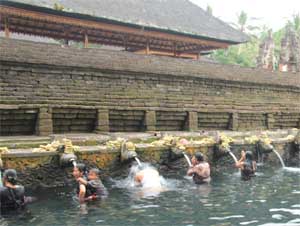 Tirta Empul is a name of a temple located in Tampaksiring Regency, Gianyar. Tirta Empul literally can be translated into “holy water which is gushing out from the land.” Indeed, in this temple there are some waters gushing out from a great spring. This temple could be found easily in the very east side of Tampaksiring Presidential Palace. Tirta Empul Empul is also one of the historical remains in Bali, especially in Gianyar. Thus, President Soekarno was interested to build a presidential palace near its location. The presidents who visit Bali will take their times to visit this palace. Until now, Tirta Empul Temple and the its springs is one of the leading tourism objects in Gianyar Regency.

According to stone inscription found in Manukaya Village, Tirta Empul Temple was built by Sang Ratu Sri Candra Bhayasingha in Manukkaya Village around 882 Saka or 960 B.C. Just like the other temples in Bali, this temple also consists of three parts jaba pura (front yard), jaba tengah (middle courtyard), and jeroan (main temple). Jaba tengah is the location of holy water showers, whereas the jeroan is the main temple for praying. 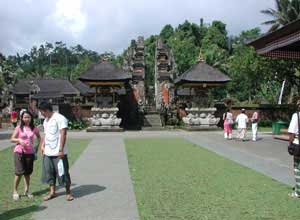 Before going further inside the temple, the tourists will given a beautiful park scenery with green grass and “maja” trees along the way to the main temple or so called jaba pura. There is also a resting area which is surrounded by a large fish pond with its colorful and attracting fish. The tourists could also feed these colorful fish and watch them swimming elegantly inside the pond. Besides that, in this resting area there is also a restaurant where the visitors could try Indonesian food whilst enjoying the view of the fish pond.

Balinese people flocks coming to this temple to “melukat” or purifying body and soul from bad things. Not just Balinese, other people from outside Bali and foreign country also come to this place to melukat too. They apparently want to feel the sensation and blessing of the holy waters in this temple. Of course, every visitor should obey the rules which are clearly written in front of the gate. The temple keepers are very friendly and always ready to help the visitors.

The most visited area is indeed the holy water (tirta) shower pool located in the jaba tengah of this temple. This pool has 30 showers which each flows holy waters from the springs located in the main temple. Every holy water flowed from those showers has different name and function, like Tirta Gering which could repel evil spirits from our body, Tirta Merta for pleading fortune and prosperity, Tirta Sudhamala for purifying our body and soul, and so on. Besides those holy waters, there is also one shower, called Pancuran Cetik which is not used for melukat. Cetik in Balinese means “poison” and the name given for this shower is related to the Balinese mythology, Mayadenawa. In this mythology it was told that King Mayadenawa was an arbitrary emperor who did not allow his people to worship God. Then, the Gods finally found out his tyranny and tried to stop him. Under the command of God Indra, they decided to fight this king. 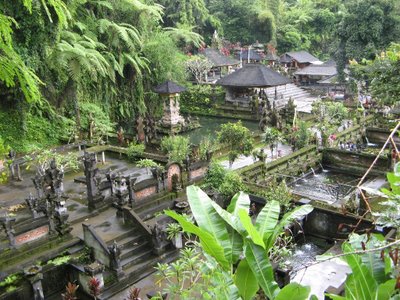 With his army, God Indra successfully defeated Mayadenawa. Then, he escaped from God Indra and hid in the north of Tampaksiring. With his evil power, he then created a poisonous spring deceiving the army of Indra who drinked the water from this spring. Knowing this, God Indra quickly thrust his spear into the ground and from there a spring was created to neutralize the poisonous spring.

According to local people, the mythology of Mayadenawa is also related to the celebration of Galungan Day. Galungan is a symbol of victory for the virtue over the evil. In galungan Day, every Barong from various villages at Gianyar come to this temple to be bathed with the holy waters of Tirta Empul. Barong is the symbol of virtue in this universe, so by bathing it in the holy water it is expected that the holiness and goodness aura of the barong could be maintained.

This temple is located 41 km north from Kuta in Tampaksiring Village, Gianyar Regency. It could be reach in 1.5 hour driving. The road heading to this tourism object is in very good condition. Besides visiting this temple, the visitors could also visit Tampaksiring Presidential Palace which is adjacent.

This temple is free for Balinese people who wants to pray, but for tourists, the entrance ticket cost Rp 6.000 per peson.

In front of Tirta Empul near the parking area, there are some stands which sold Balinese souvenirs and handicrafts. Besides that, there are also shirts, Balinese threads, and of course food. Always try to bargain, because you may get cheaper price from these kind sellers.