Bajra Sandhi is the name of a famous monument and museum which is located in the capital of Bali, Denpasar. This monument of Balinese struggle against the Dutch colonists is exactly located in Jalan Raya Puputan Niti Mandala, in front of Denpasar Governor’s office. Balinese Struggle Monument was started to build in the center of Denpasar City since 1988 and was inaugurated in 2003. As its name implies, this monument keeps the memorabilia of the Balinese freedom fighters’ persistence since the royal era where they were forcing the independence until the modern era where they were struggling to maintain this nation’s independence especially in the region of Bali.

The idea of building Balinese Struggle Monument was proposed in 1980 by Dr. Ida Bagus Mantra who was the governor of Bali at that time. In that year, he got the idea of creating a particular place for commemorating the hard effort of Balinese in repelling the Dutch colonist from this island. Then in 1981, a monument design contest was held to select the best architecture. The contest was won by an architectural student of Technical Faculty of Udayana University named Ida Bagus Yadnya. After that, in 1988 the construction was begun and after 13 years, it was finally finished. In 2001, the concrete building was finished, and one year after the dioramas was added into the museum and environment maintenance was done. In September 2002, a decree from the Governor of Bali about the hiring of the chief of the monument maintenance was implemented. In June 2003, the monument was inaugurated by Mrs. President, Megawati Soekarnoputri, and finally in the 1st of August 2004, the Balinese Struggle Monument or Bajra Sandhi Monument was opened to public.

This monument which is located in the middle of Renon Field or also known as Nitimandala Field, has attracted so many visitors because of its well maintained surroundings and great architecture reflecting the toughness and also the artistic side that Balinese have. This monument is also situated in a strategic location because it is situated in front of Bali Governor’s Office and Regional Parliament’s Building. This area was the independence battlefield between Balinese armies and Dutch armies. This war is popular as “Perang Puputan” which means “all-out war.” This monument was established to pay homage to the war heroes and give a symbol of honor for Balinese struggle over the independence of Indonesia. 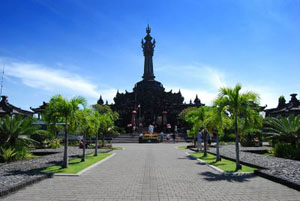 This monument stands on a 138,830 m2 land with the main building’s size approximately 4,900 m2. The adult visitors should pay Rp 2,000 for entering the building and children should pay Rp 1,000 for the entrance ticket; A very cheap price. When you enter the museum inside this monument, you will see a lot of interesting things. The interior of this monument is as good as its exterior. The collection of this monument consists of total 17 various dioramas showing the struggle of Balinese freedom fighters. Some of them show the heroic story of the Balinese in repelling the Dutch colonists, such as the story of Jagaraga war in Buleleng, Puputan Badung war, and Puputan Klungkung war. Not just that, some of the dioramas also show the lunge of Balinese in protecting national independence after the proclamation of Indonesian Independence in 1945. For example, the war in Buleleng Harbor, war in Bali Strait, until the famous Puputan Margarana war under the command of Lieutenant Colonel I Gusti Ngurah Rai.

Besides dioramas, there are also some heroes portrait paintings, such as the picture of I Gusti Ngurah Rai with its soldiers, Ciung Wanara. In this monument, there is also a library contains historical archives and books, Balinese food shop, and handicrafts shops. The visitors could also go to the top of the Bajra Sandhi’s tower to get an amazing panorama of this monuments’ surrounding. From here you could see clearly the view of Denpasar City and activities on the Renon Field. The great architectural design of this monument is also a great place to take photographs. 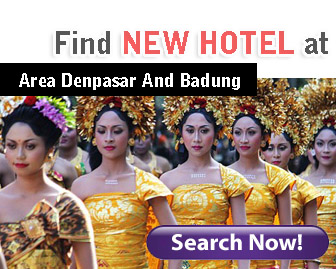 To visit this historical monument, you could easily use personal vehicles or public transportation because of its strategic location in the middle of the city. It will need around 30 minute driving from Ngurah Rai International Airport or approximately 13 kilometers from the airport. From the area of Kuta, it will need around 20 minutes to reach this monument. This monument is opened daily for public, except for the national holidays. From Monday to Friday, it is opened from 08.00 until 17.00, while in the weekend it is opened from 09.30 – 17.00.