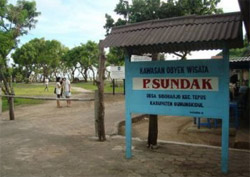 Sundak is a beautiful beach located in Sidoharjo Village, Tepus District, Gunungkidul, Yogyakarta. According to the story which is told by the local residents, the name Sundak was taken and then used after in this location there was a fight between a dog and a hedgehog. The fight was initiated when a stray and hungry dog met a hedgehog in this beach. This hedgehog was chased down into a cave and then ended up eaten by this dog. The owner, who was looking for his dog saw his dog went out of the cave soaking wet with half of the hedgehog’s body. Curious, he checked into the cave and found the other half of this animal’s body and also a spring. After that fight, the owner of the dog called this beach as “Sundak.” Sundak is the combination of two words, “asu” which means dog, and “landak” which means hedgehog. Besides that, the spring that was found in that location was used as the water source for the local residents. Now a water pipe is installed here to flow the water into the settlements around there.

After accidentally named, this beach was getting famous and could attract visitors. It is not only because of the unique name, but also because of the beauty of this beach with its white sand and peaceful ambience. Now, this beach even has been visited by both local and foreign tourists. Because of that, Sundak Beach has been developed by the local government as the mainstay tourism object especially in the region of Gunungkidul. Although becoming mainstay tourism object for its region, this beach is still administered by the local residents, not the government.

No wonder this beach is one of the most attractive places located in Yogyakarta, because the beauty of Sundak Beach is real. The coastline is covered by clean white sand combined with clear water of the sea. Besides that, the beach is shallow and could be explored until 30 meters from the coast. Under the water, there are some small corals and rocks as the home for the tiny sea biota that you could see in this beach.

There are also some rock hills and limestone cliffs in the north of this beach with height around 12 meters. These hills are like decorating the beach which adds another beauty for this beach. In one of these hills, the spring that was mentioned above could be found.

In the afternoon, the tourists could enjoy the amazing view of sunset in the horizon of Indian Ocean whilst enjoying the peaceful ambience of this beach.

From Yogyakarta to the capital of Gunungkidul Regency, Wonosari, you could get on a public bus departs from Giwangan Terminal, Yogyakarta. You could also choose between minibus and big bus with charge starting from Rp 4,000 or more. The trip could take around one hour. After arriving in Wonosari Town, the passengers will be deployed around Wonosari Market. From here, you should get on a minibus heading to Baron or Krakal Beach. It will take around 40 minutes until 1 hour before arriving at the location.

However, if you go to this beach by personal vehicles directly from Yogyakarta, it will be easier with approximate travelling time around 2 hours. 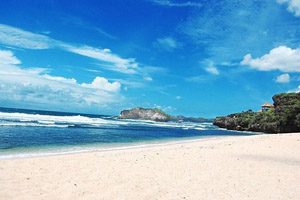 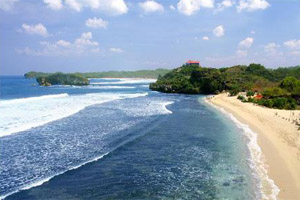 Accommodations and Other Facilities

Sundak Beach is still in the category of newly opened beach, so you will not find any resort or lodge around here. However, in the other beaches located in the west of Sundak Beach there are a lot of lodges enough for spending nights, such as in Kukup Beach, Krakal Beach, or Baron Beach. Moreover, the room charge for one night is also cheap starting from Rp 20,000 – Rp 50,000. There are also some homestay around these beaches.

For dining option, you could try some food shops or taverns made for attracting tourists. In these places there are wide selection of seafood and other dishes. The food stalls lining up in the beach offers you various kind of local seafood dishes which are worthy to be tried. 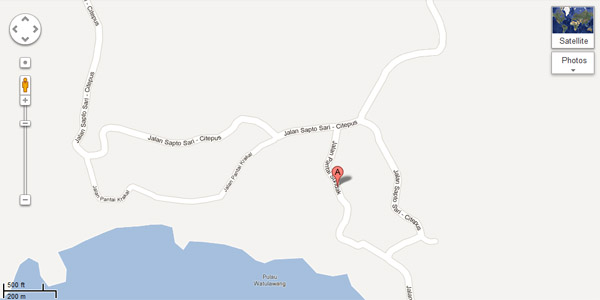