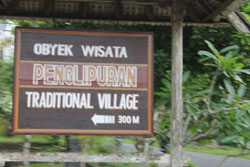 Bangli, is the only regency in Bali which does not have beach as tourism object. However, Bangli also has other potentials that is very unique which could only be found in this regency, such as nature panorama and unique customs of its people. One of the villages which have unique customs in Bangli is Penglipuran Village. The location of this village is easy to be reached. It is located near Kintamani and Bangli famous attractions, Tampaksiring Palace and Tirta Empul. This village is located in the Bangli District, Bangli Regency, around 45 kilometers from the capital city, Denpasar.

When you enter this village, you will be amazed by the architecture of the houses which are all the similar. The similarities are in the form of gate which has bamboo roof and 2.5 meter high, slim door in a size of one adult, and the color of house which use the natural brown color made from dirt. Another similarity is in dividing parts of a house. A house in Penglipuran Village must follow the arranging rule of bale (small hall), room, and kitchen. Almost all of these buildings use bamboo as their part.

According to the headman of this village, the similarity that exists in here is designed to create togetherness amongst the villagers. Besides that, they hope that they could preserve the nature by keep using natural elements in their life. Due to its commitment, this village got Kalpataru Award (award for environmental conservation) from Indonesian Government. However, because of modernization some of the villagers now begin to use bricks to build house instead of bamboo. Related to this situation, the headman stated that he understands and allow some of them using bricks because it is still natural and the form of the house still obey the rule of this village.

The harmony of this village is not the only attractive thing here. The natural surroundings are also interesting. With entrance ticket starting from Rp 7,500 until Rp. 10,000 per visitor, you could enjoy a great atmosphere of this classic Balinese Village. Since becoming one of the mainstay tourism objects in Bali, more than 100 people visit this village every day.

This village possessed a beautiful panorama, fresh air, comfort, silence, peace, and uniqueness of village layout. It is supported by the hospitality of the villagers and their awareness in conserving the nature. Moreover, they have their own system in managing the use of water from its source.

In Penglipuran, the village is divided into three areas/zones: parahyangan (head), pawongan (body), and palemahan (foot). Parahyangan is the most sacred and highest area in this village around 700 meters above sea level. In this area there is a temple called Penataran Temple. Down the stairs from this area of temple, you will enter the pawongan zone which consists of west and east settlements. These settlements are divided by a main road with 3 meters width which stretch out from north to south. In pawongan zone, there are 226 patriarchs with average livelihood as farmers, ranchers, and bamboo artists. The ancestors of this village taught them to be friendly with the environment. Thus, 40 percent of this 112 hectare village is bamboo forest. Moreover, cutting down bamboo in Penglipuran could not be done haphazardly. The person who wants to cut down his bamboo tree must get permission from the village’s priest. 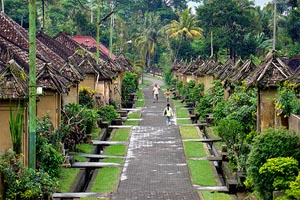 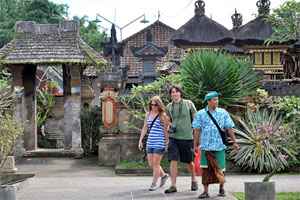 According to a humanist Ketut Sumarta, the characteristic of Bali Aga (Ancient Bali) people is their high respect for woman. The form of this respect is realized in an “Awig-awig” (village rule) of Penglipuran Village.

In Penglipuran, the excommunication place is called Karang Memadu. The size of this place is very narrow. From long ago, until now Karang Memadu has never been occupied, so it shows that no one ever break the rule of this village.

Besides polygamy, stealing or robbing is also strictly prohibited. If someone is found stealing anything, the punishment is also severe because he/she will be asked to give at least 5 chickens for offerings with various colors to every ancestor’s temples that he/she has.

Another unique thing of this village is the custom of their villagers who do not cremate their family who pass away. This is uncommon thing in Bali because cremation or also known as Ngaben is a tradition for the other Balinese people. The corpse of the villager will only be buried without cremated. The reason behind this custom is apparently related to the effort of conserving nature. It is said that, cremating the corpse could result environmental pollution, so they prefer burying the body of their passed family under the ground.

The effort of this village’s residents in conserving nature is a great example for everyone. This village has lived in harmony for a long time because of that effort. Penglipuran is a village that you must visit when you spend your holiday in Bali.