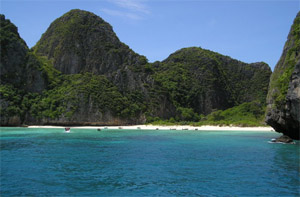 Sempu Island is a tropical small island located in the southern part of Java Island. This island is registered in the area of Malang Regency, East Java. Now, Sempu Island is declared as a wildlife sanctuary/conservation area by the government of Indonesia. Surprisingly, there is no brackish spring found in this area, even though the island is small and surrounded by ocean. Sempu Island has an area of approximately 877 hectare which is adjacent with Sempu Strait (Sendang Biru) and surrounded by Indian Ocean in the south, east, and west side. Sempu Island could be reached from Malang through Sendang Biru Beach. You could contact the local fishermen to rent their raft or boat and to get a permission/license to cross the strait into this beautiful island.

The splash of the wave, soft sand, and thousands of blinking stars will complete your vacation in Sempu Island with an unparalleled romantic atmosphere. So many people have been attracted to the charm and beauty of this uninhabited small island. From the city of Malang, it will need 4 hour drive to reach Sendang Biru, the crossing point of Sempu Island. You can use your own personal vehicle or public transportation because the road heading to that area, is relatively in good condition. The trip for 4 hours will not be boring because the amazing landscapes of towns, rice fields, and teak forests are very enjoyable to see.

After that 4 hour trip, you will arrive in Sendang Biru dock. Here, you will be required to register you and your trip mate to the office of Local Forestry Service which is located on the end of the dock. This process must be done because Sempu Island is a conservation area which is very important to keep from any possible threats, including irresponsible visitors. Indeed, the aim of this registration is to note or record you as the visitor of the island and then it could be used as evidence if in any case there is something wrong in the island related to the visitors. Sempu Island is a conservation area thus no buildings or residents could be found there. However, the travelers or tourists could still visit this island as long as they keep the preservation and cleanliness of this island. 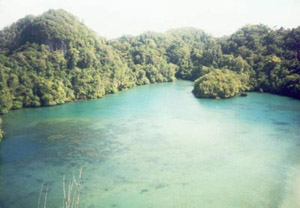 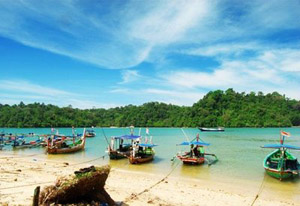 This 877 hectare island has many interesting destinations like Kembar Beach (“kembar” means twin) and Segara Anakan which is the most famous part from Sempu Island. Segara Anakan is a beautiful lagoon which was created naturally by the ferocity of South Ocean’s wave. Natural and full of beautiful panorama, this place is a piece of paradise on earth. This beautiful lagoon has pretty white sand and clean turquoise water. Segara Anakan is a lagoon which is located behind Indian Ocean, separated only by towering reef walls. To get into this Segara Anakan, you must go on foot (trekking) for about 2 hours or more, depending on the field mastery or soil’s moisture. In the dry season, the trip would be easier because of the solidness of the soil stepped on and also the clarity of the pathway. In the rainy season, it will take longer time than usual, because you will face muddy soil and unclear pathway which also cause by the mud. However, all of your hard effort and tiredness will be paid off when you arrive in Segara Anakan. The beauty of the lagoon could be enjoyed all time; morning, afternoon, and night. In the morning until afternoon, the best activity would be playing water and swimming around the lagoon. The weather may get hotter, but the water temperature in this lagoon will still be cool. It is caused by the lush forest and caves which surround the lagoon, keeping the water temperature cool. Meanwhile, at night you could lit fire and enjoy the sensation of the nature’s peaceful atmosphere.

Because uninhabited, the island is not provided with electricity. Light could be created from bonfire or lighter. Lying on the soft sand whilst watching the thousands of blinking stars will be a perfect way to close the day. Also, enjoy the total peace of the island without any disturbance of machine sounds. However, in the weekend you will rarely found the total quiet situation because you will get companies from the other visitors; not bad at all though.
To visit this amazing island, besides using personal vehicle from Gadang to Turen you could go on bus with only Rp 5000. After that, from Turen to Sendang Biru it will cost Rp 15000. For the boat rent, you will get various prices around Rp 100,000 until Rp 200,000. That price has already included pickup service in the next day. The trip crossing into the island will only take 5 minutes. Actually, those amounts are nothing compared to the amazing experiences that you will gain in this island.