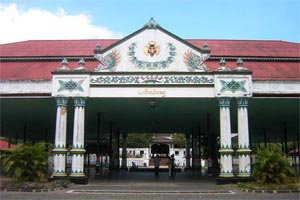 Kraton means a palace where the kings live. Kraton Jogya or completely called as Keraton Kasultanan Ngayogyakarta Hadiningrat located in the center of Yogyakarta region. It was built in 1755 by prince Mangkubumi Sukowati who then given a new name as Sri Sultan Hamengku Buwono I. He was the first king of Yogyakarta Kingdom which was reigned from 1755-1792. Before taking Kraton Yogyakarta, he was living at Ambar Ketawang Gamping, Sleman, five kilometers west from Kraton.

He then decided to build a kingdom that was located between two rivers and streams of Winongo Code. Banyan forest was chosen to be the perfect location of the palace regarding the land was between two rivers and it could protect the palace from flooding. This location is within an imaginary line of the southern sea of Java and Mount Merapi. This palace was taken through the long struggle between 1747-1755 which was ended by the treaty of Gianti.

The building of the Kraton is consisted of seven bangsal or a separate house used for saving many kraton’s commodity. Each of them is separated by regol or entrance gate. Each regol has different name such as Brojonolo, Sri Manganti, Danapratopo, Kemagangan, Gadungmlati, and Kemandungan. Specifically, Kraton is located between two part of the Yogyakarta city hall that are called as north Alun-alun and south Alun-alun. Entirely, the wide of the land of the Kraton is approximately one and half square kilometers. The main building also covered by double wall within 3.5 meters high and it looks like a huge square wall from the outside (1.000 x 1.000 meters). However, to enter the palace from the main gate, people should go through the entrance hall named plengkung. There are five gate standing entire the palace and each gate also given a different name. The names are chosen based on their place of wind direction. The gate from the northwest called as Plengkung Tarunasura or Plengkung Wijilan, Plengkung Jogosuro or Plengkung Ngasem in the southwest, Plengkung Joyoboyo or Plengkung Tamansari in the west. Plengkung Nirboyo or Plengkung Gading in the south and the last is Plengkung Tambakboyo or Plengkung Gondomanan located in the east.

Inside the palace, there is a fort used for saving the weapon which is located in the southern part of the kraton. To get into the fort, people should find a small road which used for the mobilization of soldier and weapon from the outside. The four corner of the fort were equipped with a small hole that used to scout the enemy. 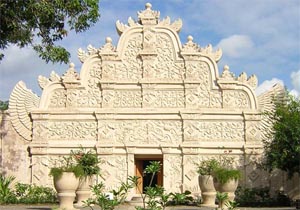 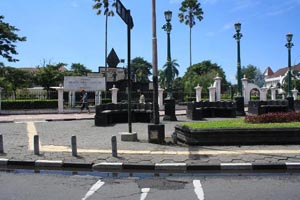 Nowadays, Keraton Yogyakarta or well-known as Yogyakarta Palace is not only a place for the king and his family live but it is also dedicated as a center of Javanese culture in the Special Region of Yogykarta. The palace now is becoming a living museum of cultural development in Java and purposed to be the flame guard of its culture. There are many collections belong to the king such as replica of Kraton’s heirloom and various of traditional musicians called gamelan. Among the palace, many museums are created such as Yogyakarta Palace Railway Museum, Museum of Yogyakarta and Batik Museum. Many visitors from inside or outside country interested to know and see directly to the palace on how the kingdom can be preserved and how the Javanese culture developed and continued till this present year. The tourist also will be able to learn deeply about the Javanese culture and its history by visiting this palace as well. Besides the display of to a variety of cultural and architectural objects can be seen by the visitor, the performances of gamelan musicians, traditional Javanese song or called as macepat, shadow puppets or human puppet will be always performed at around 10:00 to 12:00 in the palace especially at the Bangsal Sri Manganti.

To visit the Kraton, the entrance fee will be available at IDR 5,000 and additional fee for using camera is at IDR 1,000. The palace opens every day but if there is a traditional ceremony occurred, the palace will be closed during the ceremony. The palace is opened for public from 08.30 pm to 02.00pm except Fridays only opened until 13.00. In short, by visiting Kraton Yogyakarta, you will be provided both valuable and memorable experience.