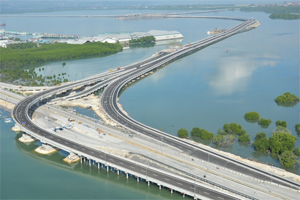 Bali can be said as the most unique, beautiful, and wonderful island in Indonesia; even the world has acknowledge that. However, now we are not going to discuss about Bali’s uniqueness in the sector of culture, landscape, or tourism. In this article, we are going to discuss about the new highway which has been on the spotlight recently. The new highway of Bali is the latest transportation infrastructure project of the government which can connect three bustling areas of Benoa, Ngurah Rai Airport, and Nusa Dua. This highway was already inaugurated (not opened yet) in Juli 2013. This highway is the first highway built in Bali. Besides that, this unique highway also passes over the sea of South Bali area which is very famous for its beautiful panorama.

This “unnamed” highway has 12.7 km length which 10 km of it is located over the sea. This bridge-highway becomes the first and the longest in Indonesia which almost as long as Penang Bridge in Malaysia with 13,5 km length and Union Bridge in Kanada with 12,9 km length. Besides that, this highway will also become the second highway in Indonesia which provides special way for motorbike. It was expected that the existence of this highway can reduce the high traffic that often occurs at certain hours or holidays.

Now, after inaugurated and tested for the first time, this highway which temporarily called JDP (Jalan Di Atas Perairan) or Road Over the Sea; or also called Bali Highway is undergoing finishing phase. The contractor is working on completing the facilities of this highway such as setting traffic signs, toll gate, light, and so on.

Proposed Names for the Highway 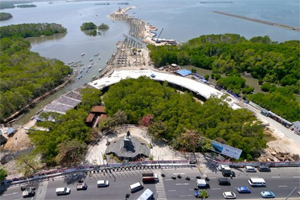 Some people have proposed few names for the first highway in Bali. For example, an academician from Udayana University, Prof I Nyoman Darma Putra suggested that this highway is named after a great Balinese artist I Wayan Lotring (1898-1983).

Based on his opinion, the reason for choosing that name is that Lotring was a great traditional art and music guru which contributed a lot to Balinese art and culture development. Lotring was an artist from Kuta, Badung. In the past, he became teacher for a lot of Balinese artists and also foreign artists, for example Collin McPhee which is an ethnic music expert from Canada,

There were also other named proposed for this highway such as Soekarno-Hatta (first president and vice president), I Gusti Ngurah Rai, I Gusti Patih Jelantik, or I Gusti Nyoman Lempad (Balinese great painter in the 20th century), until the name of current governor, Made Mangku Pastika. However, it seems that the certain proposed names have been set and reduced until there are only two options: Soekarno-Hatta or Bali Mandara. The grand opening of this highway is planned to be hold on 14th of August 2013 which coincides with the Bali Province Anniversary and Pagerwesi Day. 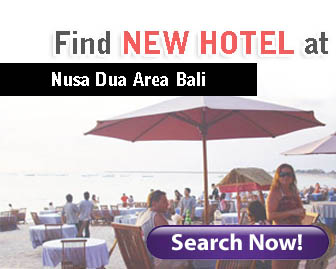 One thing that we can proud of from this highway is all the design and construction was all done by Indonesians. Besides that, the construction process also involved around three thousand workers. We must admit that, often, the construction of mega structures in Indonesia needs help from foreigner, but this time we can manage to use our own resources. 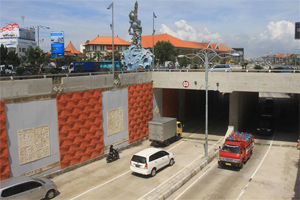 Underpass is another solution that Balinese government offers to reduce the traffic jam in Bali. Underpass Dewa Ruci consists of two ways; one from south (from Ngurah Rai Airport to Sunset Road) and one from north (from Sunset Road to Ngurah Rai Airport). This area is indeed the most crowded area that always experiences high traffic.

The value of this underpass is estimated around IDR 136.19 billions. In the construction process of this underpass, the big statue of Dewa Ruci did not touched at all as a part of honoring the local value and culture. This underpass has already operated since May 2013.

The construction of this highway and underpass is highly expected to be able to open more access and overcome the traffic jam problem which now is identical to the south region of Bali. Besides that, both of these infrastructures are also built as a preparation for the upcoming APEC Confrence in October 2013. However, the most important and significant benefit from it should not only for that worldwide event, but for Bali so that the tourism sector gets its space for breathing again.