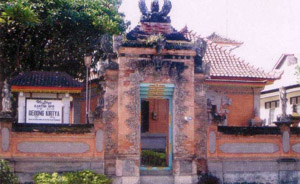 Have you ever wondered why Balinese tradition is preserved well through generations? Do they have something like a basic foundation of the ceremony, tradition, beliefs? How do they know exactly when and how to do a certain ceremony with such complicated details? They must have notes or at least books to remember the procedure, don’t they?

The answer to all those questions is related to the preservation of the legacy of Balinese’s Ancestor. While the world is shifted to a higher technology era, Bali keeps treasuring its ancestor legacy trough tradition and documentation. The most famous preservation for Balinese ancient document is the Gedong Kirtya Museum. This museum is the treasure of Balinese literature, history, and other philosophy.

The Gedong Kirtya museum is located in Buleleng regency, Singaraja. The exact location of this museum is in the building area of Sasana Budaya near Puri Agung (old palace of Buleleng Kingdom). It was founded in 1982 during the Ducth Colonial era. This museum had been internationally acclaimed as an ancient manuscript museum. It is also said that Gedong Kirtya museum is the only one of its kind in the world. Moreover, many foreign students are visiting this museum for research, studies, observation, and many other purposes. Some are frequently visiting this museum and some are scheduled to visit this museum every six month or on school holiday.

This museum collects, copies, and preserves a huge number of documents in various forms such as transcription on a metal plate, books, and lontar. The content of these documents are varying to a common and ordinary writing until the most sacred and sacral manuscript. Village guideline and regulation can also be found in these documents. Some of them are centuries old documents that well preserved. Mostly, ancient documents in Gedong Kirtya Museum are in form of lontar.

Lontar is an ancient document type that was written in a palm leaf by using a knife and written in Balinese ancient calligraphy. There are a lot of topics that had been written in this form of document including Balinese traditional medicine and therapy, Balinese traditional architecture, Balinese Calendar system, history, epic story, and many others. Therefore, many of these documents became the main foundation of Balinese tradition, religious ceremony, and even Balinese perception. In these recent days, not so many Balinese people can read the script crafted on lontar. Thus, the content of this document had been well applied into several media such as modern calendar and books.
However, translation and media alternation is influenced by perception. Moreover, nothing could replace the original work. Also, reviews and reconsideration related to the content of translated media is always needed to ensure the truth. And that is the reason of Gedong Kirtya museum to keep those documents and replicate the decayed or broken documents. 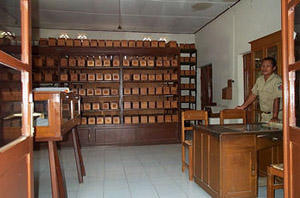 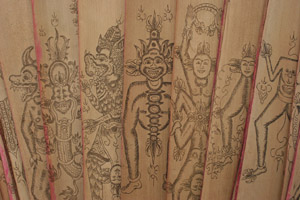 Information and manuscript crafted on lontar and other ancient documents are priceless. Therefore, to make the information understandable and accessible by everybody, a project led by Ron Jenkins in collaboration with Balinese scholars I Nyoman Catra, Dewa Made Dharmawan, and also Elizabeth Ridolfo (from the Internet Archive Foundation) was launched in 2011 together with other staffs. The big idea was popped up in 2012 with the aim to save, preserve and widespread the richness of Balinese literature heritage to the world. Therefore, people from any country can access these documents and understand the information. This project is conducted by taking photograph of every single pages of the lontar and uploaded to internet server. Moreover, the content of the document will also be translated into various languages such as Balinese, Bahasa Indonesia, and English. This project will be a giant step to Balinese literature for the world.

Are you interested to visit this museum? Well this museum can be reached approximately 11 kilometers from Lovina Beach. And don’t worry if you cannot read the documents. There are some staffs and operators that would kindly explain the history, purpose and many other things about the museum. If you are traveling from Denpasar, you can visit several tourism spot along the way such as Git-Git waterfall, Buyan and Tamblingan Lake. Moreover, when you arrived in the north Bali, you can visit some other tourism spot such as Banjar Hotspring, Sing-sing waterfall, Lovina beach, and many others. Therefore, as a final advice, be sure to visit Gedong Kirtya as the only lontar museum in the world.