There was the year 2012 will soon be over. The whole world is ready to welcome the New Year 2013 with new hope. If you are planning to spend your new year’s eve in Bali, then you must choose to celebrate it in these two favorite places. The two locations in Bali which always become the center of New Year transition celebration are Puputan Badung City Park Denpasar and Kuta Beach. Both of these places will be full of Balinese and tourists who want to celebrate New Year’s Eve in the crowd. Although both are favorites, these places have their own characteristics. 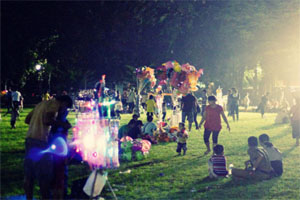 New Year’s Eve celebration in Puputan Margarana Park Denpasar or also known as Puputan Badung City Park is usually dominated by the citizen of Denpasar and surrounding areas. If you are planning to visit Puputan Badung City Park in the New Year’s Eve, you will be presented with friendly and sociable atmosphere. In this place, the countdown to the new year is enlivened by fireworks. Besides that, the citizens of Denpasar are also entertained by music and art performances both from local Balinese artists and national artists. Thousands of Denpasar citizens usually thronged in this park waiting for midnight when they could celebrate the new year.

Before midnight, usually people start coming to this city park from afternoon. The crowd of people coming to this place makes the traffic around the area jammed. Some routes near the location will be closed because of the exceeded parking area capacity. Around the park you will also see a lot of merchants selling New Year’s Eve typical things such as trumpet, fireworks, firecrackers, and do not forget food.

Reviewing the previous 2011 and 2012, in this center of Denpasar city the celebration of New Year’s Eve were very merry, enlivened by various performances such as Baris Dance, drum band, and other Balinese art performances such as wayang (puppet show). The festivity of new year in Denpasar could be seen in the countdown to the new year transition. Thousands of fireworks will lighten and decorate the night sky. The cheers of the people welcoming the new year will accompany the popping sounds of fireworks. Usually, people will stay up until 07.00 a.m. in the next day celebrating the new year’s arrival.

Before sunrise, there will be giant balloon release ceremony as the symbol of releasing the previous year and at the same time welcoming the new year. This ceremony is usually attended by the mayor of Denpasar City as the symbol of solidarity. 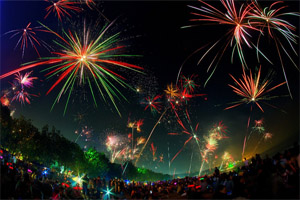 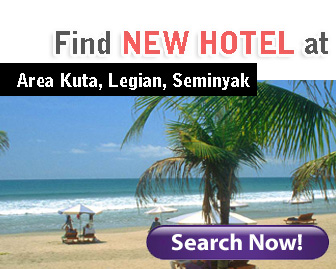 Usually, right in the New Year’s transition some clubs or hotels in Kuta provide you with a free fireworks show. You can see great fireworks with various kinds and forms. Maybe you could see greater and more beautiful fireworks here than in Puputan Park. According to the Head of Kuta Beach Guard, Gusti Ngurah Tresna, the celebration in Kuta Beach is usually guarded by police, army, SAR team, beach guards, and dan pecalang. Due to the festivity of the party which sometimes is uncontrolled, potential riots could happen. Extra security will be needed to prevent those things, such as hangover, crime, until bomb threat.

Both of these places indeed have their own characteristics. It is up to you to choose the most suitable one. However, wherever the place is, a New Year’s Eve celebration should be always done with a prayer and new hope for a better year.