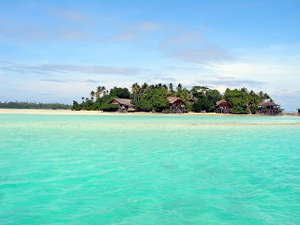 Derawan Island is located in Derawan Archipelago, Berau, East Kalimantan (Borneo). Derawan has a flat beach with beautiful white sand and light blue sea. In the surrounding waters, there is a marine (underwater) park which is famous as a diving spot. In the depth of 5 meters, various species of sea biota could be seen, like cuttlefish, lobster, ghostpipe fish, bluering octopus, nudibranchs, seahorses, ribbon eels, and scorpionfish.

In the coral reef approximately 10 meter depth, there is ”Blue Trigger Wall,” a 18 meter long reef with so many red-toothed trigger fishes around.

This island is a real tropical paradise with gradation of soft green and blue water, mild white sand, the line of coconut tree along the coastal line, a small forest inside the island, and do not forget the beauty of its underwater life. Dr. Carden Wallace from Queensland Tropical Museum, Australia had have a research about the marine wealth of Derawan Island resulting discovery of more than 50 types of Arcropora (sea animals) in one coral reef. No wonder if this island occupies the top three places for a world class diving spot, making this island as a dream of every divers.

Around Derawan Island, there are 28 identified spots for diving. To explore all of these spots, at least 10 days are needed with one diving in each spot. Moving from one spot to another needs a boat, however if the tourists want to explore the island, it could be done on foot.

the coral reefs of this island spread out in every sandbar, like Pulau Panjang Sandbar, Masimbung Sandbar, Buliulin Sandbar, Pinaka Sandbar, Tababinga Sandbar, and Muaras Sandbar.
The main area of coral reefs: 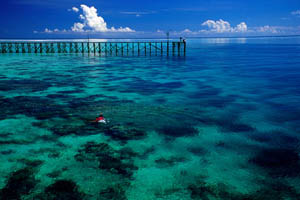 In 2003, a reef fish survey showed that this island has 832 species, and at least 1.051 species in Berau with dominant species of Gobes (Gobiidae), Wrasses (Labridae), dan Damselfishes (Pomacentridae). 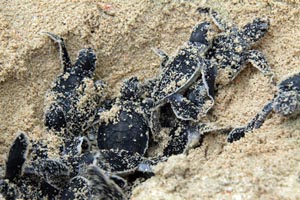 Green turtles are sometimes visible from the wooden bridge in the beach. We can see these turtles swim back and forth in the surface of clear water. Even, when we are diving, these friendly turtle will swim around us with no worries. Once in a time, these turtles could also be seen around the cottage in the coast of the island. At night, some turtles come to the beach and lying their eggs in the sand.

The islands around Derawan

Other islands around Derawan are also worthy to visit, like Sangalaki, Maratua, dan Kakaban which each has its own uniqueness. Manta Rays which has 3.5 m wide fin and (sometimes) Black Manta Rays with 6 m fin could also be found around Sangalaki Island. Meanwhile, Kakaban Island has its own uniqueness, a prehistoric lake in the middle of the sea; the only one in Asia. 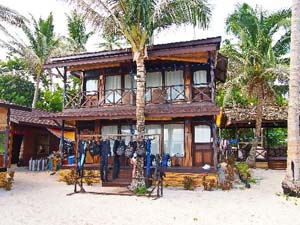 Derawan Island provides some facilities like cottage, diving equipments, speedboat, and restaurant. This island also offers some affordable lodges which are owned by the local people. These houses are very modest, and its location is over the sea; around 100 meters from the land which eases the occupants to see various kind of colorful fish and turtle swimming below the house.

To get Derawan Island, first, tourists could fly for 3 hours to Balikpapan from Jakarta, Surabaya, Yogyakarta, or Denpasar. After that, we still need to get on airplane to reach Cape Redeb, about one hour from Balikpapan. Besides that, Cape Redeb could also be reached by crossing the sea, through boat from Samarinda or Tarakan.