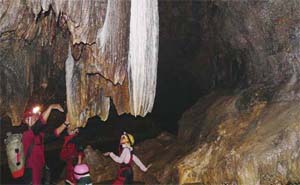 Once again, we will discuss a tourism object from Yogyakarta which always offers beautiful and unique place to be explored. As one of the favorite destinations in Indonesia, Yogyakarta indeed offers various tourism choices for the tourists and travelers. Some of the tourism objects of Yogyakarta have even been popular worldwide such as Borobudur and Prambanan. Besides that, the other objects like Malioboro, Parangtritis Beach, or Keraton Yogyakarta have been being favorite destination, especially for the domestic tourists.

Besides those famous places, apparently there are still a lot of interesting destinations in Yogyakarta. The kinds of them are starting from natural destination, cultural destinations, culinary destination, until spiritual destination. For you who are fond of adventure and outdoor activities, you should try to visit Cerme Cave. Indeed, this tourism object is not as famous as the other objects mentioned above, but the exoticism and adventure that this place offers are worthy to be tried. Cerme Cave is located in Srunggo Village, District Imogiri, Bantul, Yogyakarta. From the downtown of Yogyakarta, this cave is located approximately 20 km south. Cerme Cave is a natural cave which has a length of 1.5 km and ends until the area of Panggang, Gunung Kidul. Actually, besides this cave there are also the other caves with smaller size such as Dalang Cave, Ledek Cave, Badut Cave, and Kaum Cave.

Reputedly, this cave was functioned as a meeting place for the Islam missionaries in Java Island which are called Walisongo. In their holy journey spreading Islam, they found this cave and then decided to use it as the meeting place for discussing their plans. After that, the cave is called Cerme Cave. The name “Cerme” is derived from the word “Ceramah” which means preach. 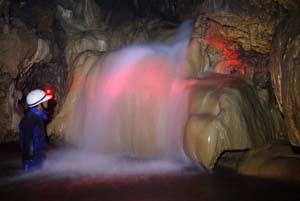 For reaching the entrance of the cave, the visitors must struggle a bit to climb the hill by going up the 759 stairs that become the main way there. Because of its height, the landscape viewed from outside of this cave is superbly amazing, especially at night. Meanwhile, inside the cave, you could see a lot of wonderful stalactites and stalagmites. Due to variations of water forming process, these stalactites and stalagmites also have varied and different forms. The types of these forms are curtains, shield, and canopy. All of these rocks are so beautiful in decorating the cave. There is also a small river flows along the cave which is also the main access for exploring the cave. This small river also has its own historical value because in the colonialism era, this river was used by the Dutch to generate electricity. The remnants of the utilities still exist until now.

For exploring this cave, the visitors must be prepared to be soaked wet because as it said before, the main access for exploring this cave is only through the river. However, you do not need to worry because the depth of its river is only 0.5 until 1 meter. Although this river is shallow but the visitors must always be careful because in some spots the roof of the cave is very close to the surface of the water so particular techniques are need to pass it. Apart from its extreme and challenging condition, Cerme Cave has been often explored by the villagers or the visitors even until the end point. It is not surprising that this cave always get visitors because its beauty and safety especially for the beginners who wants to try caving here.

Inside this cave, you will be able to see a lot of misleading intersections and alleys. Because of that, for your own safety and comfort, it is highly suggested that you use a guide which has been familiar with the cave. Complete lighting equipments such as flashlight, torch, or portable lamp should be brought because the situation inside the cave could be blinding dark. Related to its history, this cave has a lot of rooms with different functions such as meeting room, holy water, gamelan (musical instrument), paddy barn, kraton, stage, and many more.

Cerme Cave is categorized as an active cave. The meaning of active here is the rocks and ornaments of the cave will keep growing and changing. Cerme Cave is also categorized as wet cave because along the cave’s route a river flows with small debit but could be big in the rainy season. The ornaments inside the cave are also complete, starting from stalactite, stalagmite, gourdam, gordin, flowstone, canopy, and the other beauty of a cave. Besides possessing natural beauty, this 5 meters high cave also has two gate, entrance and exit so it is easy to be explored in one way. Like the other caves in Indonesia, in particular months there will be a special ritual held in this cave. This ritual would be very attractive for the visitors, especially the tourists from foreign countries.