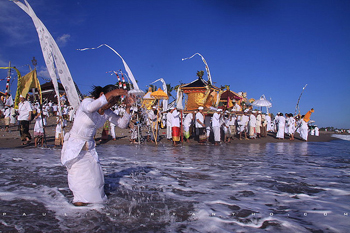 Bali is the most well known tourist destination in Indonesia. People visit Bali since there are many interesting things that can be seen in Bali. The interesting things that can be seen in Bali are not only its natural beauty but also its culture and custom since Balinese is well known as people who still holding tight their traditional cultures along with the modern one. Moreover, since the majority of Balinese are Hindu, thus, their religious holy day is much related to Hindu religious holy day. There are many religious holy days that related to Hindu that are commemorated in Bali. The holy days are such as Nyepi, Galungan, Saraswati, Kuningan, etc. Nyepi is the most well known Hindu religious holy day not only in Bali but also all over the world. It is become famous since this holy day may be considered as a unique holy day. Nyepi is a holy day that is commemorated every Saka new year in Balinese calendar, meanwhile, in national calendar it is happens around March but the date always changing due to the different counting system to Balinese calendar. Nyepi means “Day of Silence”, thus, during Nyepi day; Balinese Hindu will do four prohibitions in 24 hours. They are “amati geni”, “amati karya”, “amati lelunganan”, and “amati lelanguan”. Amati geni means that Balinese is not allowed to light any fire, electricity is included. Amati karya means that Balinese is not allowed to work. Amati lelunganan means that Balinese is not allowed to go outside. Furthermore, amati lelanguan means that Balinese should do fasting and cannot entertain themselves. In order to make sure that the prohibitions are followed, there are traditional security men which called “Pecalang” whose job to patrol the street. During Nyepi all of the public activities must be stop, thus, all of the people in Bali must follow the rules though they do not celebrate Nyepi. Thus, the only airport in Bali will also be closed. The day after Nyepi is called “Ngembak Geni” in which in this day friends and families are gather to ask forgiveness from one and another. In this day, the activities are going back to normal again. 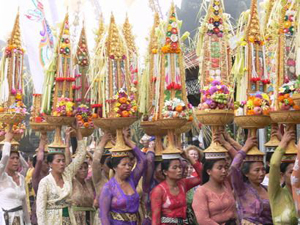 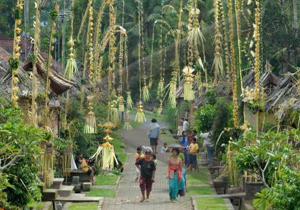 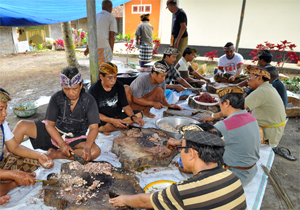 The other Hindu religious holy day that is celebrated in Bali is galungan. Galungan is a Hindu religious holy day in which Balinese Hindu celebrating the victory of “dharma” over “adharma”. In this day, the Balinese Hindu will do prayer to the infinite “Ida Sang Hyang Widi Wasa” supremacy as the creator of the world. Balinese Hindu thanks Him for his blessings. Galungan is often commemorated twice per solar year. However, the date is calculated according to 210-day Balinese calendar. Before Galungan, Balinese already busy in preparing the day. They will make “penjor” or a bamboo poles that is weighed down by the offerings that is suspended at the end. The “penjor” will be put in the entrance of the house.

Usually, during the Balinese will be focused on the celebration of the special days, thus, school and business activities will be stopped. Balinese believe that in Galungan their ancestors coming to their former homes, thus, they must be entertained and some offerings must be given, and for Balinese whose ancestors are not cremated yet, they should go to the graveyard and also give some offerings to their ancestors. Galungan is closed by Kuningan that is commemorated 10 days after Galungan. In Kuningan, the spirit of the ancestors is going back to heaven. Thus, when Kuningan is end, all of the Galungan decoration will be removed.

There is one other Hindu religious holy day that is celebrated in Bali. This day is called Sarawati day. Saraswati is the second biggest Hindu religious holy day after The Galungan day. Saraswati day is commemorated every “Saniscara”, “Umanis”, “Wuku Watugunung” which is based on the Balinese calendar (Pakuwon) and seven day cycle (Saniscara). Saraswati means knowledge day, the name is taken from Balinese goddess of knowledge. The aim of celebrating Saraswati is that the Balinese feel grateful to the goddess for giving them the ability to understand human nature, to write and to read. During Saraswati day, in the afternoon, Balinese is not allowed to read or write the book since all of the books are offered. Later, in the evening, people read religious books in their own home or in the temple. This night is called “malam sastra”.

There are some sequences in celebrating Saraswati. They are pangredanan, saraswati, banyu pinaruh, soma ribek, etc. Pangredanan is the day before Saraswati day in which Balinese make preparations such as cleaned and dusted the books. Saraswati is the day of celebration. Banyu pinaruh is the day after Saraswati, banyu pinaruh means that people must have a wisdom that is useful for human kinds and always flows like water. Soma ribek is two days after Saraswati, in this day, the Balinese thank to the goddess of prosperity for blessing them with food and beverage in their lives.