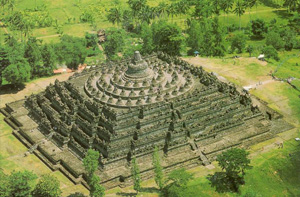 Borobudur is widely known as one of the world’s seven wonders. This Buddhist temple has 1460 relief and 504 stupa in its complex. Many people dream of visiting this great ancient building because of the captivating architectural design and function as worshipping place.

Borobudur actually is a name of a district in Magelang Regency, Central Java. It has gotten world reputation because of the existence of Borobudur Temple which is the biggest Buddhist temple as well as the grandest stupa complex in the world. Located 42 km southwest of Yogyakarta, Borobudur could be reach by either public transportation or personal vehicle. Besides the temple, Borobudur area also has other tourism potentials which spread in many places.

Borobudur was built by King Samaratungga, one of the famous king of Mataram Kuno Kingdom; the descendant of Syailendra Dynasty. According to Kayumwungan inscription, an Indonesian named Hudaya Kandahjaya stated that Borobudur was a worshipping place which was finished in 26th of May 824, almost a hundred year after the beginning of its construction. The name Borobudur itself, based on arguments of some people means “a terraced mountain” or called budhara, meanwhile other people said that Borobudur means “monastery on a high place.”

Borobudur is a building in the form of terraced pyramid, consists of 10 levels. Its height is 42 meter before renovation, thence became 34.5 meter after renovation because the lowest level of this temple sunk underground and then used as the foundation. The lowest six levels are rectangular and three levels above them are circular, and the highest one level is in the form of Buddha Stupa facing west. Every level symbolized the stages of human life. According to the schools of Budha Mahayana, every human who wants to achieve the level of Buddha must go through those stages of life.

The lowest part of Borobudur is called Kamadhatu, symbolizing humans who are still bounded by lust. Four levels above it, there are Rupadhatu which symbolize the humans who could free themselves from the lust but still attracted by appearance and form. In these levels, Budha statues are put without covers. Meanwhile, three levels above where Buddha are put inside / covered by perforated stupa are called Arupadhatu, symbolizing the humans who are free from lust, appearance, and form. The highest level which is called Arupa symbolizes the Nirvana, the place where Buddha resides.

Every level has some beautiful reliefs proving that Borobudur is truly a masterpiece. This relief will be readable if you see it in clockwise direction (left side from the entry of the temple). In its reliefs, Borobudur told a story about a legendary epic, Ramayana. Besides that, there are also some reliefs which show the condition of the society at that time. For instance, relief about farming activities which shows us about the advancement of farming system and relief of sailing ship which is the representation of the shipping advancement centered in Bergotta (Semarang) at that time.

The whole reliefs which exists in Borobudur reflecting Buddha’s teachings, so this temple is a suitable place for people who want to learn Buddhism. Atisha, a Buddhist from India in the 10th century, had come to this temple which was built 3 centuries before Angkor Wat in Cambodia, and 4 centuries before the Great Cathedral in Europe. 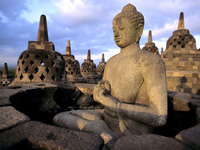 By visiting Borobudur and Buddhist texts he got from Serlingpa (one of the king of Sriwijaya Kingdom), Atisha could develop Buddhism. He was chosen to be the leader of Vikramasila Monastery and taught the Tibetan to practice Dharma or the truth. Six scripts made by him also were summarized into core of a teaching called “The Lamp for the Path to Enlightenment” or usually known as Bodhipathapradipa.

Questions that still unanswered about Borobudur until now is how the condition around the temple when it was built and how this temple could be found buried underground. Some theories stated that Borobudur was built around a swamp and then sunk caused by the eruption of Merapi Mountain. It could be concluded according to Kalkutta inscription written ‘Amawa’ means milky ocean. This word then was interpreted as Merapi’s lava.

With its grandeur and mystery, so many people from around the world really want to visit Borobudur. Even some world celebrities like Richard Gere and David Beckham with his family taking their time to see Borobudur a few years ago. Besides visiting the temple, you could also take a tour to the villages around Borobudur, like Karanganyar and Wanurejo to see the process of creating handicrafts done by the local craftsmen. You could also go to the top of Watu Kendil to observe the panorama of Borobudur from high place.