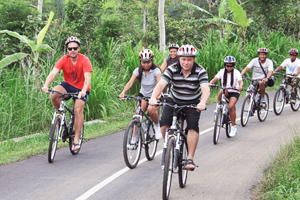 Taro Village is a beautiful and peaceful village located in Ubud, Gianyar. It is about 35 km from Denpasar, so it could be reach in approximately 1 hour driving. More than a decade ago, this village is a common Balinese quite village with rich culture and traditions. Now, this village is very famous as a vacation place for many tourists to explore the beauty this village’s nature on the back of an elephant. Very exciting experience, isn’t it? Actually, in this village there is a forest which is dwelled by a herd of white oxen (not the elephants). This animal is very respected and sacred for the either local residents or Balinese because this animal is the ride of Lord Siwa, the symbol of mother of the earth, and the complimentary animal in Ngasti procession which has its function as the witness of the ceremony.

This white ox is usually brought into the area of ceremony and then guided to round the area starting from the east clockwise in 3 laps and then finished in the east again. This ceremony is called Mepada (Maideran/Purwa Daksina). After the ceremony is over, the ox is given many offerings and foods, then this holy animal is taken back to the forest of Taro. 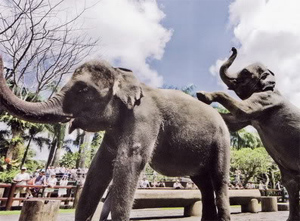 However, with the natural beauty of Taro village, now near the forest of the oxen, a new kind of tourists attraction and the only one in Bali is developed, Elephant Safari. Taro Elephant Safari Park was build in 1989, when a couple Nigel Mason dan Yanie came up with an idea of making a safari park in this village. Together, they developed this elephant safari park up until now, when it is famous and crowded by both local and foreign tourists.

In Taro Elephant Safari Park, you can play, relax, or take a closer look at the habits and characters of these Sumatra elephants, which are preserved, taken care, and bred here. Besides that, this safari park also offers various kind of activities involving elephants, like riding elephant around the park, bathing them in a pool, feeding them, watching them playing football, seeing them painting on a canvas, and taking photo with them.

To make these elephants safe and healthy, a concept of a big beautiful garden was made in a 3.5 hectares area, completed with medical center for these giants.

Not only offering beautiful and tranquil atmosphere, Taro Elephant Safari Park also completed with many facilities, like restaurants, souvenir shops, museum, information center, hotel, bungalow, boutique, spa, gazebo, swimming pool, parking lot, and even a helipad. These facilities are provided to guarantee maximum comfort of the visitors of this park. 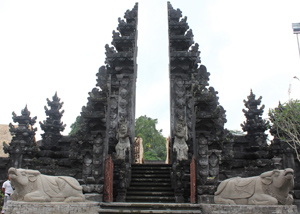 Besides that, you could also visit Gunung Raung Temple which is located near the elephant safari park. This temple is full of historical value, related to the history of Hinduism development in Bali and also the history of this village’s name origin. Moreover, the construction of this temple is highly related to the holy journey of Rsi Markandya, a holy priest of Hindu, from East Java to Bali.

In his holy journey, one day Rsi Markandya arrived in a lust forest of Agung Mountain. With his disciples, he tried to built a residential area and also farming area. However, his dispicles and followers were infected by plague. Some of them passed away and only about 400 people survived. To solve this problem, Rsi Markandya meditated and prayed to the God. Apparently, he was required to ask for permission first to Besakih Temple with a Panca Datu planting ceremony.

His ceremony and prayer were granted. After that, Rsi Markadya successfully built residential and farming area around the mountain, even far away until a fertile area called Sarwa Ada Village. Here, he built a “pasraman” (Hindu school) called Pasraman Gunung Raung. However, in his effort to finish the pasraman, he faced so many obstacles and difficulties.

Thence, he had gone to East Java to find an answer from a holy meditation. However, the only clue he got was to go back to Bali and do a meditation there. He really went back to Bali and meditate in his pasraman, and then he saw a bright light shining from a particular place. When he approached the source of the light, he realized that the light came from a tree. In the area of this tree grown, then Rsi Markandya built a temple called Gunung Raung. This temple with the shining tree then became the center of the village. Because of that, this village is called Taro. Taro is derived from word “taru” which means “tree.”