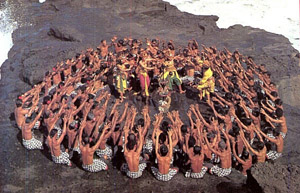 Kecak is the name of a popular Balinese dance among the tourists. Foreign tourists usually call this dance as “Monkey Dance” because they think that the sound from the dance is like the sound of monkey. Besides that, in the dance there is also indeed a figure of monkey named Hanuman and Sugriwa. Some favorit places for watching Kecak Dance show is in the area of Batubulan, also in Uluwatu and Tanah Lot where this dance is performed with a background of amazing sunset.

Kecak Dance was created around 1930’s by a famous Balinese dancer named I Wayan Limbak, and a German painter named Walter Spies. They were inspired after watching performance of dances in ritual of Sanghyang which the dancers were dancing in a trance condition. The ritual of Sanghyang itself is an original ritual of Balinese which came from the tradition of pre-Hindu people with a purpose for expel evil spirits. This ritual then adopted and integrated into the dance that I Wayan Limbak and Walter Spies had created, and then which was performed for an art tour in various nations of Europe.

Kecak Dance is usually performed by a number of male dancers from 50 until 150 persons for 45 until 60 minutes. This dance combines the voices of the dancers (like an a cappella) with percussive sound of “cak, cak, cak..” as they throw up their arms to the air. The dance is like an accompanist to the fragment of Ramayana that performed as the main story. As explained above, because the unique chants of the dancers are like monkeys’ sound, so the foreign tourists called this dance as “Monkey Dance”.

Ever wondered why the name of this dance is Kecak? Actually, by listening to this dance directly we could easily conclude that it is named after the sounds that the dancers produced (“cak” becomes “kecak”). This word is chanted rhythmically which produces a unique and harmonic voice combination which sometimes added with typical accents and shouts. Uniquely, Kecak Dance does not use any musical instruments to be performed with the dance. It only uses the chants which imitates the sounds of musical instruments. This aspect has made Kecak Dance different from the other Balinese traditional dances.

The fragment of Ramayana epic which becomes the source story of this dance is the story of Dewi Sita (the wife of Rama) abduction by King Rahwana from Alengka Kingdom. Kecak Dance focuses on the struggle of Rama freeing his wife which is kidnapped and taken away by Rahwana. In his effort, Rama was assisted by his brother Laksmana, Hanuman (white monkey) and Sugriwa (monkey king). The dancers of kecak which play role as the chanters only uses checked cloth (kamen poleng) around their waist. Meanwhile, the main characters like Rama, Sita, Laksmana, Rahwana, Hanuman, and Sugriwa use complete dancing costume. 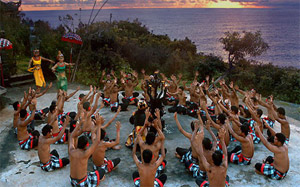 For years, Kecak Dance keeps changing and developing. Since 1970’s this dance has undergone development in the aspect of story and show. From the aspect of story, the performance has not depended only on one fragment of Ramayana story, but also the other stories. Thence, from the aspect of the show, the dance performance could now be seen in every part of Bali after could only be seen in Bona Village – Gianyar. Besides that, various activities involving Kecak such as art festivals are often held by government or art institute to preserve and develop this dance. For your information, there was also a record made for the most Kecak dancers involved in a show in 1979, when 500 dancers were involved in this record breaking effort. At that time, the story which was used was not Ramayana, but Mahabarata. After that, in September 29th, this record was once again broken in a show held by the Government of Tabanan Regency who performed a colossal Kecak Dance involving 5000 dancers in the exotic area of Tanah Lot.

Kecak Dance is a dance which is rich with the value of tradition and beliefs of Balinese. It is good to know that this dance does not lose by the modernization and keep growing with the life artistic life of Balinese.