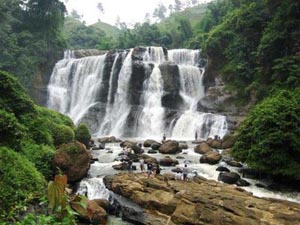 Curug means waterfall in Sundanese (West Java). Curug Malela or Malela waterfall is a beautiful waterfall located in Cicadas Village, Rongga District, West Java. Different with the other waterfalls in Indonesia, this waterfall has a unique form which is similar with Niagara Waterfall in Ontario, Canada. This Curug Malela is indeed smaller in the water debit and size, but from the structure this waterfall deserves a reputation as the Little Niagara.

Based on its topography, the river which falls as Curug Malela is Cicurug River. Curug Marela itself is approximately 50 meters in height and 70 meters in width. Besides Curug Malela, the biggest one which flows to the downstream, there are also other six series of multi tiers waterfall along 1 kilometer area. Those waterfalls are Curug Katumiri, Curug Manglid, Curug Ngeubul, Curug Sumpel, Curug Palisir, and Curug Pameungpeuk which are all located in Cicadas Village.

Every waterfall has its own uniqueness, for example Curug Malela which has a spread water when falling down, Curug Katumiri which could show a beautiful rainbow around 08.00-09.00 in the morning, or Curug Ngeubul with its unified flow when falling down resulting a foggy surrounding and booming sound (the opposite of Curug Malela). Meanwhile, Curug Manglid has a hidden cave behind its waterfall, Curug Sumpel has a big river below its waterfall, Curug Palisir which is the little Curug Malela, and Curug Pameungpeuk which is the estuary waterfall between Cidadap River and Cisoka River.

Steep relief of Rongga Plateau gives a hard terrain with some valleys forming v-form with angle more than 45 degree. On this plateau the rivers erode the area vertically. The slopes creating a limited terrain to be accessed, but in the other hands resulting a fascinating landscape which are enjoyable to be watch. Some of the plateaus’ height reaching up to 1000 meters above sea level. The area around these plateaus has been used for tea garden since the era of Dutch Colonialism in Indonesia.

The kind of stones which are forming Curug Malela are very hard and tough. The toughness of these stones creating an impression of a firm and slick edge walls. These walls surrounding the waterfall looks very beautiful and elegant. The elegance of this waterfall becomes even more obvious when this waterfall is photographed in a low speed setting, resulting a picture looks like silky threads flowing from upside.

Even though Culug Malela has been labeled with a predicate of tourism object, this area is not really suitable with that call. Its hard access, makes this waterfall more suitable to be called as an outbound or trekking area.

Since 2006, the local government has declared their will to administer this potential tourism object. Until now, the road heading to Curug Malela has been repaired even though not really well. Unfortunately, not all roads are repaired. There are still 5 kilometers way which do not undergo the repair. 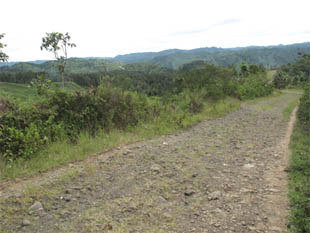 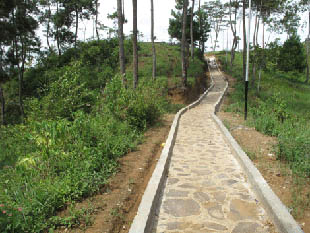 The absence of street signs is the minus of this area. It is supposed us to be a more active asker, because without asking to the local people you will get lost easily. After asking enough direction you will arrive at Bunijaya and then turn left into Simpang Rongga. After that, you will face ascending winding roads which need careful driving. In the town of Rongga, you will face another intersection and this time you need to go to the left heading into Kubang, Montaya. In the middle of the trip, when you are crossing the District of Gununghalu, Rongga, you could enjoy the green scenery of tea garden.

The trip from Gununghalu to Kubang Montaya which is only 20 km should be taken in around 2 hours because of the problems mentioned above, for instance the absence of street signs or broken roads, especially from Simpang Kubang to the Cicadas. Holed and rough roads will need extra care to be passed. It needs around one hour to take that 3 kilometers road. After arriving in Cicadas, it does not mean that Curug Malela is close. After this, you will need to cross a farm area on foot. After one hour trekking, you will finally arrive in Curug Malela.

Indeed, the trip to Curug Malela is exhausting, but once you get there all of the tiredness will be paid off with the beautiful panorama of this little Niagara.