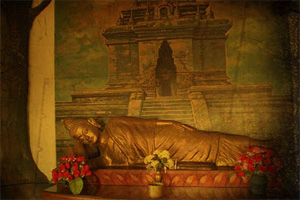 Brahmavihara-Arama is the name of a vihara/monastery which is known as the biggest Buddhist temple in Bali. This place is also usually called Vihara Buddha Banjar because of its location in Banjar District, Buleleng. The exact location of this monastery is on the hill area of Tegeha Hamlet, Banjar District, 22 kilometers to the west from Singaraja City and 11 kilometers from the area of Lovina. Meanwhile, from the Denpasar City, this monastery is approximately 100 kilometers and could be reached in 2.5 – 3 hour driving through Denpasar-Bedugul-Singaraja route. Besides its function as a praying place for the Buddhist, this monastery is also place for meditating.

Brahmavihara-Arama is located on a peaceful hill of Buleleng, so when you face to the north you will see the amazing landscape of North Bali Ocean with beautiful green areas of rice fields and farm from the top. The tranquil ambience and its peaceful surrounding landscape have made this monastery as a perfect place for meditation. The unique and artistic buildings have also become attracting power for the tourists.

Brahmavihara-Arama was built in 1969 over a 4 hectare area and then finished one year later. In 1973 this holy building was inaugurated as the main Buddha monastery. Before that, there was a monastery located in Banjar Hot Spring, but the followers or members of that place were not much; below 25 persons. Considering this situation, Brahmavihara-Arama then used for the public monastery as this place was more appropriate.

Brahmavihara-Arama consists of three words: Brahma, Vihara, and Arama. Brahma means praiseworthy / noble. Vihara means the way of life, and Arama means place. From those words combination it could be concluded that the meaning of Brahmavihara-Arama is a place for self exercising, enhancing praiseworthy and noble behavior which in Buddhism consist of Metta, Karuna, Mudita dan Upekkha.

This Buddhist monastery consists of five main complexes, such as:

1. Uposatha Gara, which is located on the western top. This place is like a room filled with reliefs about the birth of Buddha, and in the middle of this room there is a Buddha statue in a state of reaching Nirvana. This room is functioned as inauguration place for the monk candidates.

2. Dharmasala, which is located in the eastern part. This place is like a lecture room where the monks discuss and study the holy tenet. This place is also used for conducting worship and various kinds of spiritual activities.

3. Stupa, which is situated in the northwestern corner of the monastery. Quite unique building which looks like a giant bell.

4. Bodi Tree, which is located in the southwestern corner of the monastery. Around this tree, there are a lot of beautiful reliefs. This place symbolizes the victory of Buddha when He reached the eternal perfection (nirvana).

5. Kuti is the settlement of the monks and students which are studying in this monastery. Besides that, this place is also used for exercising by these monks.

When you enter Brahmavihara-Arama, you may think that this is a Hindu temple. The Hinduism elements in this Buddhist monastery are indeed noticeable because it was done on purpose. Moreover, Hindu and Buddha have a strong relationship because Buddha is one of the Hindu avatars (God as the world savior). However, this combination does not lose the typical characteristics of the Buddhism. Every yard or area in this place is connected by stairs which every rung is written with the principles of Buddhism. 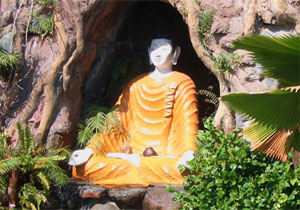 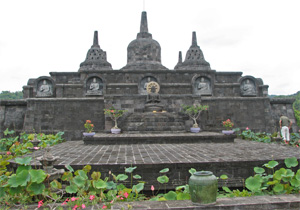 When you arrive in the highest level of this monastery, you will see a spacious area with beautiful yard and at the end of this yard there is a giant stupa in form of Borobudur Temple miniature. Inside this stupa, there is a room with 4 Golden Buddha statues facing four directions. This place is the place for meditating. Usually, in the Buddhists’ holiday this place will be full of worshipping people. However, this place is not only crowded in the holidays because there are meditations routines hold in this place almost every day. The participants are not only from the Buddhists, but also the other regions and beliefs which are seeking for inner peace. Moreover, Bahkan, this monastery is often visited by meditation groups both from Indonesia or foreign countries.

In this monastery complex, there are some Buddha statues spread in various locations, in every corner of the park or room. Among them, there are two Buddha statues which are very interesting: Parinirwana statue and Buddha as a Buddha statue. Both of these statues are donation from Thailand and Sri Lanka in 1977 which is made from bronze covered with gold. Each of these statues is placed in different rooms. Parinirwana statue illustrates Buddha in a meditation state while He is emptying body and mind. Meanwhile, Buddha as a Buddha statue illustrates Buddha who is reaching eternal perfection. Besides those two statues, the other statues are made from sandstone and concrete spread in the park illustrating the existence of 31 natural positions outside Nirvana.