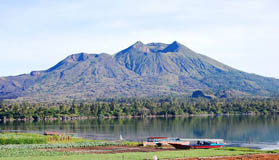 If you are looking for a complete packaging of holiday and education at once, this museum is a perfect choice. The Batur Volcano museum is located in Kintamani District of Bangli Regency in Bali. This is the first volcanic museum in Indonesia. If you are travelling through Kintamani but not visiting this museum, you miss a diamond among the gold during your holiday. This museum is a treasure chest full of information about volcano in Indonesia especially the Batur volcano. This museum explains huge varieties of information from the history, process, material, studies and many more including Balinese religious perspective towards volcano. This museum was built in regard to the fact that Indonesia possesses more than 500 volcanoes which 129 among them are categorized as active.

This museum can be found on the right side of the street after Penelokan mount view in Kintamani if you are traveling from Lovina or Singaraja. This is a famous museum for local citizen in Kintamani, so you can ask people around there about the location of the museum. Moreover, this museum is reachable in relatively short distance from several tourism objects such as Ubud, Bangli, Besakih Temple, or Tampak siring.

Since this museum was built in 2007, not so many people notice this museum in Bali. The front appearance of the building is also more likely to be a market or ordinary building. However, the facilities inside are very interesting and informative. You can find diorama, map, sample of volcanic eruption material, several tools used to detect upcoming eruption, pictures, audio-visual media, computer-based interface, big theater playing movies about volcanic eruption, and many others. As the result of those facilities, many students are visiting this museum every month. However, the numbers of visitors are still low compared to other museum in Bali.

In the first floor, you will find a big diorama showing the relation of volcano worldwide. It is controlled by some console button paired with the name of the volcano. When you pushed the button, the diorama will turn on the lamp of the volcano in the map. There are also some buttons used as a console to some volcano as a category, so when you push this button, a group of volcano will turned on. However, some other cool dioramas are not working since the temperature of the area is too humid and not good for the devices. And as replacement, some computer interfaces are ready to show several interesting information such as the history of the Batur Lake and Volcano. There is also a diagram of how traditional and modern way of early warning system is conducted in the past. 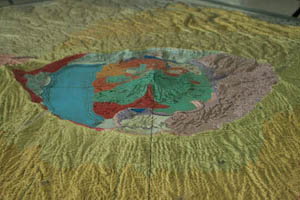 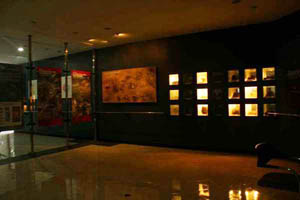 When you see a beautiful view in Penelokan, you will feel amazed by the beauty of a wide lake there. And in the museum you will understand that the lake was the caldera of the Batur Volcano several thousand years ago. It means that the lake was the basement of the volcano which was very wide, and it can be imagined how high the Batur Volcano was in the prehistoric times. Well as stated previously, this museum also shows some volcanic material from Mount Agung, Mount Batur, and other regional and International material.

In the second floor, you can see an explanation of how volcanic rock is carved by Balinese people as one of the artistic pride of Bali. A Geopark showing Batur environment and cultural reservation is also exhibited there. Another facility in the second floor is a movie theater with the capacity of more than 100 people inside. However, if you want to ask the staff to play the movie, you need to be in a group of least 25 individuals. An auditorium is also available in the second floor which usually used by local government or other company.

The third floor is specialized as the monitoring and research station towards the activity of the Batur Volcano since it is still active. In this floor, a telescope equipped with aerial photograph is available. By reading instruction or asking guidance from the museum staffs, visitors can also see the nature landscape of Batur Volcano. By their eyes, visitors may see the smoke coming out from the volcano as a sign that the volcano is still active. Local citizen are well aware of the might of Batur Volcano based on religious and scientific perspective. Therefore, when a sign of eruption is appear, local citizen will conduct a ceremony that related to this event. Event without modern early warning system, local citizen can notice the signs of eruption trough the changing act of animals and nature condition. And this museum explains all details of the phenomena. So, be sure to visit this museum at least once on your trip in Bali.